The Stars Seem So Far Away by Margret Helgadottir 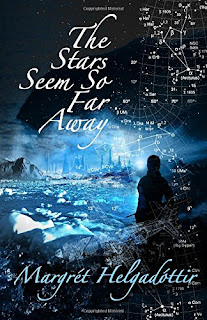 
A girl sailing alone over the Northern seas outwits pirates, another guards the seed bunkers established by her father, a boy stumbles across a former astronaut now living in a wrecked plane ..... through the eyes of five different survivors, Margret Helgadottir shares a bleak vision of a dying Earth, devastated by global warming, where only the polar regions are still habitable.

In this dystopian future, people have fled North and built new cities on Svalbard and Greenland, but even here life is difficult. Plague and famine attack the remaining population, families become separated and, for most, life is just about surviving from day to day. Only in The Green Land, as it's now known, does a ray of hope remain - there are seed banks, artificial animals and enough remaining civilisation to put together a space flight...


At first this seems like a collection of short stories, but gradually they begin to merge into one bigger tale. The picture painted is of a devastated Earth, where all other life has died, and only Man survives - and even Mankind is hanging on by its collective fingertips! Seeing the effects of global warming brought to life in this way, gives them an immediacy that scientists statements often lack. The characters and their stories will hook you but the underlying message about environmental change can't be ignored.
I'm not sure whether this is aimed at teens, adults or both. I really enjoyed it, loved the writing style and world-building, without felling it was aimed at anyone younger - but, with the major characters all being in or around their teens, I still feel younger ages groups would enjoy it.