Death and the Seaside by Alison Moore 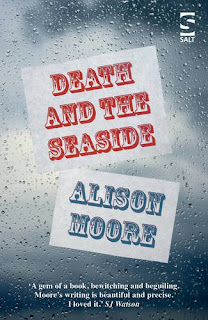 As she approaches the age of thirty, Bonnie Falls' parents have made it clear that it's time she moved out, so she finds a cheap ground floor flat, where she tries to pursue her writing while holding down dead end casual jobs. She settles in, starts sorting out the previous occupant's left-behind junk, and continues working on her current story, about a young woman, Susan, who moves to the seaside, and discovers enigmatic notes being left in her attic bedroom. Then her landlady Sylvia Slythe begins to take an interest in Bonnie, dropping round at odd hours and suggesting they go away to the seaside together. To the reader, her motives seem suspicious but Bonnie seems to remain blissfully unaware...

Death and The Seaside is a difficult book to categorise - if I say 'psychological thriller' a certain highly dramatic style of writing and plot development is expected, and this is far from that. Maybe it's better to say that it's a study of failing and manipulation ... but that sounds rather serious and dull, so again doesn't quite fit.

There are themes running through it of the power of names, and suggestibility, with more than a hint of the old question 'which came first, the chicken or the egg?' Are our destinies fixed by our names, and others' perceptions of us? But of course, this is a story, and so the names are deliberately chosen to fit the nature of the characters.

Bonnie's life is one of missed opportunities. She appears to have been hampered by people's expectations - her surname 'Falls' for starters, or her parents' attitude that she is bound to mess up anything she attempts - and her susceptibility to outside influence - she's easily swayed by advertising or even just a passing comment from someone. It seems as if she is destined to fall, figuratively or physically; she has a history of both - abandoning her university course to settle for dull minimum wage jobs, and a childhood tendency to jump off piers.
Sylvia, on the other hand, is sly with a snake-like hypnotism and menace - again a reflection of her name with its echoes of Slytherin house in Harry Potter, which led me to liken her actions to those of the Snake in the Garden of Eden. She's interested in self-fulfilling prophecies, suggestibility, and how expectation influences behaviour; Bonnie seems like an ideal candidate to study.
Tension mounts when we realise that Sylvia is not a hands-off observer but someone who likes to manipulate and see how far she can push her 'subject'. Can Bonnie kick against her conditioning, upbringing, and the inevitability of falling/failing to see where Sylvia's devious plans are leading?

It feels rather like a beautifully shot film, lingering over the tiniest of actions, but not necessarily letting us inside the characters' heads, so while Sylvia's history sheds light on her character, Bonnie remains enigmatic. I didn't know whether she was happy with her life, frustrated or just resigned to how things had turned out; she certainly seems emotionally detached from the world.

Read it with an eye looking for parallels between life and books, or glimpses of the relationship between author and character, and there are plenty. As Bonnie's story advances, so does the story she's writing about Susan. There are similarities between the two, emphasised and played on by Sylvia, but there comes a point where life and art go separate ways. Of course, the whole story is 'art' (and sometimes I feel my thoughts running round a Mobius strip while trying to review this book!)

The ending comes with a feel of a last jigsaw piece dropping into place, or one of those wooden mind-bending 3D puzzles that won't hold together without the last section; only at this point is the whole structure revealed. For me, it's a book that has more impact once finished than it did while reading.

So I've ended up with the thought that it's a psychological thriller about life, art, and inescapable fate - lets hope the author thought it was too! In another writer's hands, this would easily have turned into a high drama psychological thriller, Moore takes an altogether subtler approach, letting the menace slowly ooze out; I rather found myself wishing that she'd written Gone Girl ...