The King's Revenge by Philip Womack 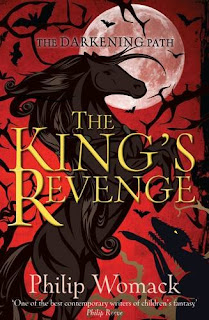 The third book in The Darkening Path trilogy follows on from The King's Shadow to conclude the story of Simon's and Flora's efforts to retrieve their siblings from the Broken King.

In finally killing the king a trap has been triggered - a trap that is to bring an end to all three realms. If they can't stop the trap from closing fully there will be no world for them to go home to.

Much has happened to get the story this far with everything the young reader could want - fights, monsters, tension, triumphs and tragedies - this book delivers in the same abundance as the previous books. Fast and furious from the off, the reader will find it difficult to put down until the last page has been turned.

The narrative unfolds mostly from Simon's perspective although he is not the real hero - nor are the demi-gods. The "hero-ship" is shared pretty evenly between the four children and the youngsters from the silver realm with, arguably, the girls slightly ahead of the boys. Because of this it's difficult to see how this book wouldn't appeal to any youngster who is into reading fantasy.

A really great end to a great trilogy with an opening left for them to meet up again in one of the realms. Described as for the 11+ reader I would say it would also appeal to younger readers with its easy to read format and vocabulary.