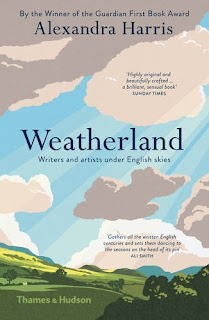 English weather is renowned for being changeable, so it's not surprising that over the years, and centuries, the attitude of writers, poets and artists towards it has changed too. In this epic work, nearly 400 pages of small type, Alexandra Harris explores shifts in attitude from Anglo-Saxons in the 8 and 9th centuries huddled round the mead-hall fire telling tales of the surrounding cold and dark, through gentleman scientists collating weather statistics, Shelley's delight in things that fly or T S Eliot's parched landscape of The Waste Land, to authors beginning to look beyond today's weather and worry about the impact of global warming.

Obviously the real weather affects everyone - from frost fairs held on the frozen Thames, to the dreadful summers of 1783 and 1816 when volcanic eruptions (from Laki in Iceland and Mount Tambora in the Dutch East Indies, respectively) polluted the atmosphere and affected weather world wide or the dreadful hurricane of November 1703 when 'barely a building survived intact', writers and artists have responded and interpreted events. I'm inclined to accept the weather as it comes, wet or dry, maybe complaining if it stays either for too long, and I was surprised to discover that the weather, or at least its representation in art and writing, has been subject to fashion in much the way that the length or cut of skirts might be, and that what was written or painted says as much about the attitude of the author/artist as it does about the actual weather experienced by the public. So, at times, a sunny day has been barely worth mentioning; real weather could only be experienced in a dramatic storm with thunder and lightning shaking the world according to Coleridge or Wordsworth, or by glimpsing the landscape through obscuring mists and tumultuous clouds (Constable). It also reflects the mood of the period too; the Victorian era was damp, drippy, or shrouded in fog; the 1920s with modern housing and transport, drier and brighter.

Without doubt this work is a vast undertaking, including snippets from authors and poets throughout the centuries, fortunately, there's a useful index at the back, so if, say, you want to find the sections referencing Jane Austen's novels, or changing attitudes to rain (see also drizzle,floods and showers) throughout the centuries you can, but don't expect a tidily laid out book of all-occasion quotes.

It won't be everybody's idea of a good read, but I found it fascinating, especially the little things that gave insight into life in past times - the fact that before Chaucer no one had really thought to celebrate the arrival of Spring, or that as early as 1661, people were commenting on pollution from chimney smoke! It covers a huge period of writing and art, charting changing attitudes to what surely has to be our favourite topic of conversation, but a couple of omissions surprised me. Although the heatwave of 1976 gets a mention via Ian McEwan's The Cement Garden written in that year, the seeming flurry of more recent books set then - Joanna Cannon's The Trouble with Goats and Sheep, and Maggie O'Farrell's Instructions for a Heatwave are the ones that instantly spring to mind - aren't covered. Another aspect of the relationship between weather and writers not explored, was its use in crime novels - many a crime writer, from Agatha Christie, Dorothy L Sayers to Ellis Peters, has involved snow, floods, or fog, to help along a plot, often working real 'freak' weather into a story.

It also made me realise how comparatively sheltered we are these days. Few of us need to spend long periods of time outdoors if the weather doesn't suit us - perhaps why today the emphasis falls on good days when we want to be outside.