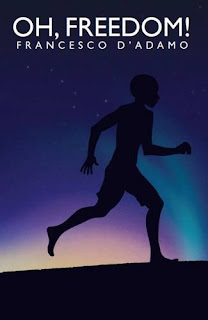 Translated from the original Italian by Sian Williams.

This book, set in Alabama in 1850, tells the story of young Tommy and his family who are living in slavery on a cotton plantation. When a stranger with a wooden leg arrives, he offers to take them to freedom along the Underground Railroad to Canada.

I expect we have all heard of the slavery in North America prior to the civil war and know that the era is safely behind us. But what was it like for the victims? And did freedom really await them later?

This book tells the story of one group who make a bid for freedom, and through the skill of the author exposes the reader to a small idea of what it may have been like for those people.

Peg Leg Joe, who leads the escape, is a legendary character who may have existed but could be a compiled fiction from many others who really lead such escape attempts.

At one point Tommy expresses his disappointment in his father to Joe, who takes him to task explaining why his father accepted slavery and didn't make a bid for freedom; before and during this exchange I really felt a better understanding of what slavery was all about.

An excellent read targeted at the younger reader.

NB - I know that there was and still is far more to slavery than just the Americas - and that it is still widely practised throughout the world today (including the 'west'!) But this story is an historical tale of bravery and heroism that improved the lives of some and, possibly, helped to destabilise the practice in one country.