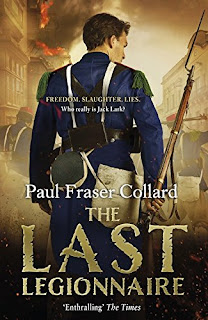 Jack Lark has, after many years' absence overseas, found himself back home - at his mother's gin palace in the East End of London. His time in the army, under a variety of aliases, has changed him but he thinks he's now ready to settle down and pick up life where he left it. Things aren't as straight-forward as that though - his mother is having to pay off local 'heavies' for protection, and Mary, the girl he thought he loved, is now a grown woman with a son to look after. Jack soon finds himself mixed up in trouble, and again indebted to army intelligence officer Major Ballard who has a new task for him overseas - this time in Italy, where French and Austrian troops are massing for war.

I've always rather liked Jack Lark and his adventures, and I'm pleased to see that the author is allowing him to grow and change with time, not to remain the impetuous young man he was in the Crimea (The Scarlet Thief) but become more mature, self-aware and able to see the down-side of his chosen career; even the victorious side leaves dead and mutilated soldiers on the field, and Jack now acknowledges than some day he could easily be one of them. This doesn't mean though that he's going to stand back well out of the way of danger; he's supposed to be on more of a mercy mission than actually engaged in the fighting, but Jack is Jack, and if there's a pitched battle or low-level skirmish around then somehow or other he'll find his way to it!


As I've come to expect from Paul Fraser Collard, The Last Legionnaire is a fast-moving action adventure which brings to life an odd bit of history that most of us are probably not aware of. (Although 'the Battle of Solferino' had a vague familiarity to it, I couldn't have said where or when it took place, and certainly had no idea about the involvement of the French Foreign Legion or the origins of the Red Cross). Collard isn't afraid to present the horrors of battle, so be prepared for violence, gore and lopped off body parts. None of this is gratuitous wallowing in blood and guts, but presenting war as it is (or was) and an important part of Jack's development.