You Will Not Have My Hate by Antoine Leiris 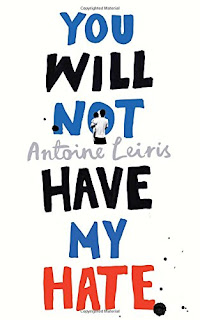 
Just over a year ago, we were all stunned by the terrorist attack on the Bataclan nightclub in Paris. While the world was filled with rage and demands for vengeance, one man posted on his Facebook page a response to the attackers saying "You will not have my hate", pledging himself to live life to the fullest, with love and laughter, without fear and hate, despite anything such terrorists could do; it was all the more remarkable because that man's wife, mother of his seventeen-month old son, had died in the attack.

In this short book, Antoine Leiris tells of his struggle through the first few weeks after his wife's death. He doesn't enter into the horror of events inside the Bataclan. He doesn't touch on the politics or religious beliefs of the attackers. His account is a very personal one - of a husband at home that night, looking after his son, seeing his world start to fall apart as news broke on TV, and of his gradual attempt to re-build a life for himself and his son.
From the first shock of horror, and the blind panic of that night, through the quandary of explaining events to a child too young to speak properly but fully able to understand that his mother is no longer there, and the overwhelming support from both friends, with their never-ending supply of home-made meals, and strangers inspired by his Facebook post, the reader is with Leiris every step of the way. You can feel the growing dread with which he watches the news bulletins, the gradually dawning horror as his wife cannot be found, and the grief that threatens to overwhelm him when her body is.

This isn't, though, a story of a man consumed by grief. What shines through the anguish is Leiris's determination that, although they took the life of his wife, the terrorists would not have claimed his, or his son's, too. To be consumed by hatred and the desire for vengeance, to give way to fear, to distrust his fellow men, would do just that. Instead, despite the heartbreak, and inspired in part by his son's ability to still find joy in everyday things, Leiris resolves to live life as fully as possible, to refuse to be defined by this one random act, and in this small way to stand up to terrorists whatever they believe in.

This is a book which opens amidst horror but leads to the light. There are undoubtedly overwhelming moments of grief, but the overall feel of the book is a positive one of hope.