The Terror by Dan Simmons 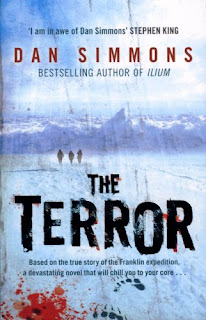 In 1845 Sir John Franklin led an expedition to discover the North-West Passage, a sea-route passing through the maze of ice and islands that make up Canada's northern coast to reach Alaska and the Pacific Ocean. His two ships - Terror and Erebus - were equipped with the latest steam technology and ice-breaking hulls, but even that wasn't enough to cope with treacherous Arctic conditions, and the ships became trapped in the ice - not just over winter, but throughout an exceptionally cold summer too.
At that point, history leaves the crew marooned with no real explanation of what happened to them - and that's where Dan Simmons steps in with The Terror ...
After two years stuck in the ice, food and coal supplies are getting low, but a greater danger is stalking the expedition; a huge, nameless, formless thing that attacks and kills crew members one by one.

I've had The Terror sitting around on my 'to be read' shelf for a long while, and picked it up just before Halloween thinking it would be a fitting read, but at over 900 pages, it's taken a while to get through. I would say though that at no point in all those pages was I bored!
As you've probably surmised, the story is a mix of historical adventure and horror - and to be honest I found the history of the expedition fascinating and didn't think the story needed the horror aspect.
I was aware to a certain extent of the Franklin expedition and its search for the North-West passage, but only in the briefest way. Simmons brings those bare facts and dates to life; the conditions on board ship, the extensive supplies designed to last five years, the hopefulness and enthusiasm at the beginning of the voyage and gradual decline in moral as both officers and men realise that they're stuck not merely overwinter (which is to be expected) but through summer and at least another winter in the ice. I was particularly impressed with how Simmons used a mix of flashbacks and conversations to flesh in the details of past voyages to both Arctic and Antarctic, without having to fall back on just listing events. The descriptions of long, dark endless nights, the sound and feel of ice moving and cracking bring the almost alien surroundings vividly to life.
The horror didn't grab me, or frighten me as much, but I wasn't worried; the whole story of the Franklin expedition is a mystery, and fascinating as such, so this is an excellent read as a fictional version of an intriguing piece of history. (For anyone interested, I read somewhere recently that the Erebus may have been discovered at last, making this a doubly timely read)