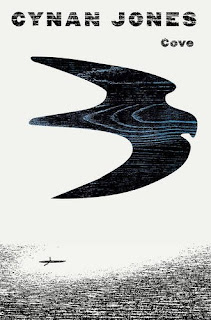 A man is paddling far out at sea when a sudden electrical storm bursts around him, lightning running down to the water - and attracted to him and his kayak. When he regains consciousness, he's out of sight of land, injured, dazed, no idea of how much time has passed, of who is is, why he's there, his paddles are lost, his sense of direction gone... Instinct alone forces him to attempt the seemingly impossible journey to land.
"a man locked in an uneven struggle with the forces of nature" is how the blurb describes Cove. Well, to me, that sounds too much like some hunky hero in an all action-packed drama facing huge mountainous waves, and fighting off killer jellyfish or attacking sharks. Rest assured - this book isn't like that at all!
It's a quiet, undramatic tale, which is surprising considering its subject. It's short at under a hundred pages. Tightly written with not a surplus word left, but it still captures the helplessness of being adrift at sea, and the man's confusion of not knowing who he is, where he belongs, and his fear at the physical enormity of the waters surrounding him - the depth below, the expanse on all sides with no sight of land.

Jones proves once again that a book doesn't need to have a massive word count to make an impact. he gives the reader enough to set their imagination to work - to feel the pain, the fear, the physical and emotional numbness, the tightly bottled-down panic, and the buried animal instinct which strives for survival without, or may even despite, man's rational thought processes.
It's a book to devour whole in one sitting, and then turn over and examine in your mind, to see various aspects and themes appear.

Although Cove is very much about one man, in one very specific situation, it also feels like a story with wider application relating to anyone drifting, astray in life, trying to find their way back to something indefinable but lost. I couldn't help but be reminded of Stevie Smith's "I was much too far out all my life/And not waving but drowning", particularly when the kayaker spots a beach in the distance, with families paddling, but he still drifts helplessly past carried by currents beyond his control.

I suspect the ending may divide readers but I see it as a hopeful one, like rushing headlong to a re-birth. Maybe I just like to be an optimist.