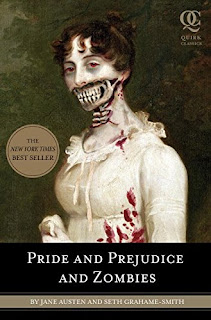 If you hadn't quite got the gist of this book from its title, the subtitle really settles it; the Classic Regency Romance - now with Ultrviolent Zombie Mayhem!
That basically says it all.


The English countryside is over-run by brains-chomping zombies, and London is virtually a fortress city; instead of the usual feminine attributes such as piano playing or sewing, the five Bennet sisters have all been well-trained in the martial arts, and help to keep the area around their home, Longbourn, and neighbouring village, Meryton, free from the undead. Other than that, the plot remains basically as Austen intended it - Elizabeth Bennet and Mr Darcy initially take a dislike to each other; her sister Jane and Darcy's friend, Mr Bingley, fall in love, but Darcy comes between the two of them; everyone lives happily ever after.

I've had this book sitting on a shelf for a while, and the combination of Halloween and a film version made me think I should take the plunge.
Seth Grahame-Smith has left Jane Austen's original text largely untouched, just cleverly sliding zombies in here and there. It's a wickedly mocking, bizarre mash-up that some (me, included) will find funny, and some will find disturbing, even disrespectful, so, although I enjoyed it, I wouldn't recommend it to all. You need to bear in mind that it's not meant to be a serious work - it's fun!
I think in some ways I'd rather hoped for more substantial changes to the overall story arc. As it is, it's good for a laugh but I don't think this is a re-readable book.
I'm in two minds about how well the film will work. A lot of the humour for me was in the juxtaposition of Austen's words with zombie mayhem, and, although the period costumes will still be there, and hopefully a lot of Austen's dialogue, I'm not sure it will be the same.