The Boy Who Made God Smile - book launch 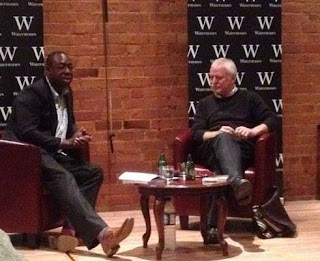 I have a vague sort of idea that the general public think that book launches are only for 'insiders' from the publishing world (like Bridget Jones and her colleagues) and close friends of the author, but, apart from a select high profile events, they're generally open to anyone interested. So, finding myself with a spare hour or so in Nottingham on Friday, I dropped into Waterstones for the launch for GJ (Garry) Martin's latest novel - The Boy Who Made God Smile.

Garry was in conversation with Henderson Mullin, chief executive of Writing East Midlands, discussing his route to publication. Although he always wanted to be a writer, for many years Garry felt he should pursue a more regular, reliable career, and for much of his life has been a teacher. this fortunately allowed him time for writing, including an extended 'working holiday' to India researching the 'god business' of superstar style gurus, which resulted in the original idea that grew into The Boy Who Made God Smile. 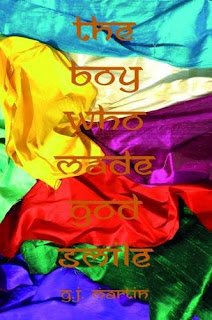 Moving between Birmingham and Bangalore, this is the story of three generations of an Indian/British family in crisis. Ari is taken to India to visit his terminally ill grandfather, and, while his father finds returning to his home baffling and strange, Ari finds it to be a fascinating place. I definitely got the impression that Ari was a youngster intent on poking his nose where the adults didn't want him to, and asking the kind of questions adults don't want to answer!

Garry also talked about being chosen to take part in the Writing East Midlands mentoring scheme. Under this, three aspiring writers are chosen and work alongside an established author, in his case crime writer Anne Zouroudi, who through feedback and advice helps them make good writing better. In Garry's case, this involved turning a single narrative into three threads which wove about each other, and cutting certain 'surplus' characters - he tried to reintroduce one of these at the proof stage but she, somewhat spookily, still ended up on a publishing version of the cutting room floor and never made it into print.


The Boy Who Made God Smile is published through Colley Books