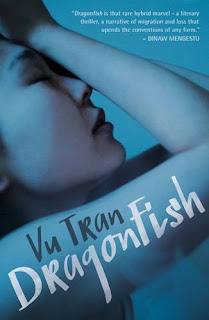 "Robert, an Oakland cop, still can't let go of Suzy, the enigmatic Vietnamese wife who left him two years ago. Now she's disappeared from her new husband, Sonny, a violent Vietnamese smuggler and gambler who is blackmailing Robert into finding her for him. As he pursues her through the sleek and seamy gambling dens of Las Vegas, shadowed by Sonny's sadistic son, 'Junior', and assisted by unexpected and reluctant allies, Robert learns more about his ex-wife than he ever did during their marriage. He finds himself chasing the ghosts of her past, one that reaches back to a refugee camp in Malaysia after the fall of Saigon, and his investigation uncovers the existence of an elusive packet of her secret letters to someone she left behind long ago.

As Robert starts illuminating the dark corners of Suzy's life, the legacy of her sins threatens to immolate them all."

The story is delivered to the reader in two distinctly different styles and paces. The first is the fast, often violent but always menacing pace of the here and now as Robert tries to find out where Suzy has gone and why Sonny wants HIM to do the finding. The second is through the calm and reflective, although still often violent, pace of the letters.

I found the switch in pace and style, which is very significant, disruptive to my reading of the book. I did enjoy the story a lot but when the pace switches it very much feels like an invitation to put the book down and take a breather - this made it a longer read than it should have been.

The characters seem an eccentric mix but the ideas seem to be drawn from the author's own experiences so gain credibility through that. The conclusion is certainly not what I expected but complements the telling very well. Not one for the faint-hearted though.

Publisher - No Exit PressGenre - Adult Crime thriller
Posted by The Mole at 11:14