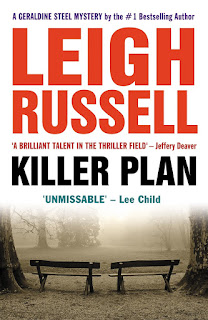 Following Caroline's brief encounter with a school friend of some 20 years ago her husband is brutally murdered. Caroline suspects the meeting wasn't an accident after all but feels she can't inform the police without implicating herself.

Then one of her identical twins goes missing - she believes he has been kidnapped.

DI Geraldine Steel's boss is looking for a fast close to the case when a second body found - it is that of her colleague, DI Nick Williams. A second murder investigation is opened and, despite sharing an office with Nick, Geraldine insists on being on the second team. But Geraldine is harbouring her own secrets which could jeopardise her career.

Geraldine Steel returns in this her seventh book and is as good as ever - in fact maybe even better. In a return to the style of the early Geraldine Steel books we, as the reader, know full well who has done what and to whom and scratch our heads wondering how Geraldine can find those missing clues to draw the puzzles together.

Russell manages to bring each character to life in a way that defies understanding. Each character we meet has their own little "foibles" with no-one - even the witnesses - being a "stock" character that produces a statement and walks away. The only problem with this kind of story is you get to see inside the head of characters that maybe, just maybe, you would rather not see - it is well worth the look though.

More about Geraldine Steel and her creator, Leigh Russell here

Publisher - No Exit Press
Genre - Adult Crime Thriller
Posted by The Mole at 13:04