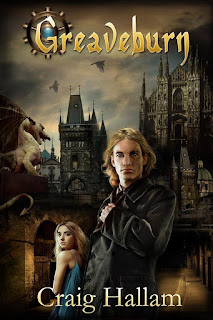 After the murder of the King Greaveburn is being ruled by Archduke Choler because Abrasia, the rightful heir, is only seventeen. The Archduke's sanity deteriorates by the day and he orders the death of people on a whim. Darrant was Abrasia's bodyguard and was eliminated by such request, and then he orders the death of Abrasia. The task is given to Professor Loosestrife, a genius who has invented a machine to restore to health anyone with any illness or injury but he is hardly philanthropic. He invents things as a challenge to himself and hides the results from the world so when this instruction comes in he sends his assistant,Wheldrake, out to buy poison and leaves the job to him.

Wheldrake recruits Abrasia's new bodyguard into the plot but meanwhile Darrant managed to survive, despite a run-in with a crocodile in the sewers and is out to see justice for himself, Abrasia and the Broken People he has fallen in with in the sewers.

It's easy to see love angles building up, obvious plot twists and devices and guess the ending... except this is steampunk and steampunk authors either don't read the manual or just set about rewriting it.

Brilliantly funny throughout but not comedic, gripping and tense with plenty of action, plenty of violence and a grand finale of an ending.

I didn't so much enjoy this book as loved it. The characters came over as plausible - you can't often say "real" and anyway steampunk is like fantasy without the fantasy and so the situations the characters are in don't relate to what we would expect. Darrant the leader and hero is also a screaming coward. Steadfast, the new bodyguard, is loyal and honourable and a racist. Lady Choler, the Archduke's sister, is your average wicked witch of child fantasy, Loosestrife is trying to find a cure for the Ague which is killing more and more of Greaveburn's citizens - not that he's going to share it with anyone though. And as the author has created such a contradictory cast of characters he then inserts comedy throughout to show them as the ridiculous stereotypes that they are.

I am really excited to see what else Hallam can come up with - but keep it steampunk please.