The Sea Between Us by Emylia Hall 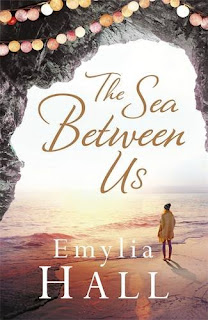 When her parents decide to move and live by the sea in Cornwall, Robyn Swinton doesn't expect to settle and make her home there - after all she's already finished her first year at university and is looking forward to striking out on her own in some more glamorous, bustling, generally exciting place like London. Then she discovers her own private cove almost at the end of the garden and the beginnings of a love affair, or two; one with surfing, the other with Jago, the boy-next-door. For when a boy rescues a girl from the sea, they have to fall in love, don't they? If only life were that simple!


This, Emylia Hall's third novel, is the nearest yet to a straight forward love story. The relationship between Robyn and Jago grows and changes over a seven year span, as instant attraction turns to something deeper, but fate seems determined to push them apart. Theirs is a story of missed chances, of so often being in the wrong place at the wrong time, of letters and messages going astray, of other relationships getting in the way - a little bit like Friends' Ross and Rachel, a little like Emma and Dexter from David Nicholls' One Day - but while it's a love story, there's so much more to it than that.
What I've loved about Emylia Hall's previous books, and has made them stand out for me above so many others, has been the capturing of place and atmosphere; in The Book of Summers it's the hot, lazy days of Hungarian summers; in A Heart Bent Out of Shape it's the snow-filled streets of Lausanne in winter. This time, she's chosen a setting closer to home - the far west of Cornwall - and almost every page is filled with yearning for the sea and surf, from the shock of the first cold wave to the elation of a few seconds upright catching a wave, she captures that tug that the sea exerts on many of us, a longing to throw oneself in and become part of it. From her first surfing attempt with a huge board and her wetsuit on back to front, comical but charming in the way of a toddler's first steps, Robyn is hooked on it!
I also loved the artistic passion that permeates the story - from Robyn's attempts to capture the pull and sweep of the waves or the play of light on the ocean through painting, to Jago's instinctive understanding of wood or the 'high' that Eliot gets playing music on stage in front of a live crowd. It's very much a book fizzing with the joy of life, and the delight in finding the thing that one 'must' do.

With it's sea-swept atmosphere, it's a great book for summer, but it's one that will linger with you far longer than a lot of other holiday reads.