The Defenceless by Kati Hiekkapelto 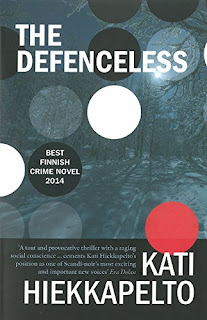 Sammy is living rough on the streets in northern Finland after his asylum application was turned down. It's not easy, particularly during the long cold winter, but back in Pakistan he believes he faces death due to his beliefs so he's hiding out, living very much hand to mouth and turning to drugs to help get him through the days. Dropping by his friend/supplier's flat, he finds himself dragged further into trouble .... but oddly it's trouble that could lead to a positive outcome for him....

When an old man is hit by a car late at night, it's at first assumed to be just another traffic accident, but Senior Constable Anna Fekete isn't so sure. Starting with the car driver's claim that the man was already lying in the road, things don't quite add up - and the more facts the police uncover, the less things make sense. Meanwhile her colleague Esko is trying to prevent the spread to Finland of a notoriously violent street gang, The Black Cobras...and somehow through the shady world of drug dealers and illegal immigration the two investigations seem linked.

I'll start with the important bit - I loved this! It's more than just a crime novel, but examines the issues that might lead to the crimes - why people might turn to crime or drugs or why people might be driven to leave their native country and seek asylum elsewhere - without for a minute letting up on the riveting story-telling.

There was something about it that made it feel, to me at least, more like real-life than a lot of crime novels do. It has a wonderful twisty plot with a multitude of threads running round each other, and even the smallest detail comes back as an important part of the investigation. There's the atmospheric setting of Finland in 'Spring' with temperatures still well below zero, deep snow still lying on the ground and the sea frozen enough to ski on! The characters are real fully-fleshed out people - from Sammy trying to dodge deportation to Esko with his offensive in-grained racist attitude. Anna herself was once a refugee, from Hungarian-speaking Serbia, and although she's lived in Finland most of her life she still feels a certain level of displacement, and of not quite belonging to either her old home or her new one.
This is the second of the Anna Fekete series but I had no trouble jumping in and catching up with her story so far, though I don't think too much about the previous story The Hummingbird has been given away. Kati Hiekkapelto might just be my new favourite Nordic Noir writer - I'm certainly looking forward to reading more by her.


translated from the Finnish by David Hackston