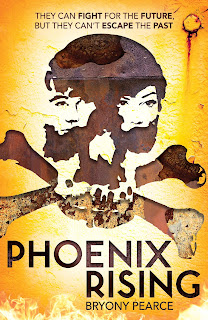 Wanted in almost every port, Toby has rarely set foot on land but lives at sea with his father, captain of the pirate ship The Phoenix. With their fiercely loyal crew they make a precarious living salvaging from the masses of junk to be found floating at sea - for in this dystopian future world, the seas are packed with all sorts of rubbish; lorries, aeroplanes, you name it you'll find it floating somewhere out there! Somewhere out there, they believe there is an island where they could live freely - but to reach it, they first need to salvage enough solar panels to power The Phoenix out into open seas, and their rival The Banshee is also on the trail of them and will stoop to anything to get their hands on them.

Phoenix Rising is a non-stop action-packed adventure full of the 'normal' pirate-y sorts of things - sea-battles, escaping from dungeons, hand to hand combat - but against a bleak, post-apocalypse backdrop. Society as we know it has crumbled, the seas are so full of junk that an ice-breaker is necessary to carve a path through it and the water itself is contaminated from all the leaked acids and oils. The emphasis though is very much on the action, which cracks along at speed, with barely a break for Toby (and the rest of the crew) to catch breath.
It is a male-dominated world but the women in it are as tough and brave as the men (if not more-so) - so should appeal equally to both boys and girls looking for an original action adventure.