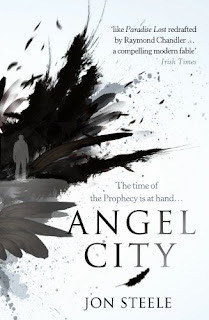 2 years have passed since the happenings at Lausanne Cathedral that resulted in it's total destruction (The Watchers). The "angels" managed to get the building repaired before any of the locals noticed but a chain of events was started that comes to fruition in this, the second book.

Katherine Taylor has had a son and is living in America. Her memory has been wiped of the events surrounding the Cathedral especially any recollection of Harper.

Harper is sent on missions that expose to him more of his own time line through his 2.5 million year life and he learns of his own role in the events that are unfolding.

Meanwhile Astruc, a seemingly mad man and his helper, Goose, are working to hurry the events along.

Action, adventure and plot twists abound as the story develops with violence and explosions figuring highly. Where the story ended up going was very much a surprise to me as fantasy and religious references intertwine to expose the author's take on some of the many bible stories - but not with any irreverence.

We very much leap into the characters and pick up the story afresh so much of the work in book 1 is not repeated. Having said that this book COULD be your starting point but you will miss out on so much if you don't start at the beginning of the trilogy. I have started the series late so I don't have long to wait to resolve the cliff hanger but if I'd had a year to wait then perhaps I would be a little frustrated.

Another fantastic fantasy from Steele with just book 3 to go now to resolve all the outstanding issues. And I'm very much looking forward to it.