Girl at War by Sara Novic 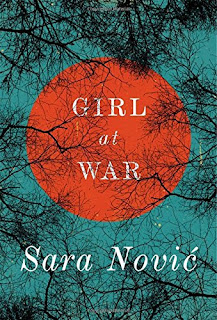 Ana's childhood in Zagreb was carefree and happy but in the summer of 1991 war is spreading throughout Yugoslavia. At first it doesn't disrupt her life much - air raids drills are turned into a source of fun and she plays games around the sandbags in the street with her friend Luka - but soon tragedy strikes and Ana is caught up in a world of ethnic cleansing and child soldiers. Luckily she has a chance to escape to America, but although her foster-family provide a safe haven, it never feels like home and ten years later she's driven to confront her past in a now-peaceful Zagreb.

This is one of those awkward books for which I've seen great reviews but which didn't grab me at all.
The story is told from the point of view of adult Ana looking back at her 10 year old self caught up in the civil war in Yugoslavia. Maybe it's the distance - ten years later Ana is over the worst horrors - but it seems an oddly flat, sanitised, tidied up version of war. Of course, being told by the older Ana, we know she survives but I just didn't feel her fear and dread - for me there was no tension, no immediacy to the events, no capturing of the horror she must have felt as her parents died.

I think what may have thrown me with this is that, despite the title, it isn't really a story about war itself - yes, it gets mentioned, but the story is more concerned with the dislocation that Ana feels. Unlike her friend Luka, who stayed in Zagreb, she's been cut from her roots. Her only remaining family is her younger sister Rahela who doesn't remember Yugoslavia at all and in the US, Ana tries to forgot the past and keeps quiet about her childhood, pretending to be as American as the next girl, but is unsettled and torn between the two places she's known as 'home'. Somehow she needs to reconcile the two parts of her, to which end she revisits Zagreb. Maybe reading it again with this in mind, I'd appreciate it more? I'm not sure.