The Watchers by Jon Steele 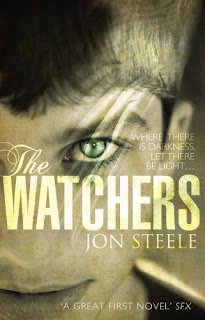 Three characters pass each other in Lausanne exchanging simple pleasantries unaware how their lives are destined to merge.

Marc Rochat, a young man with a crippled foot who displays lower than average mental capacity but whose heart and trust is so large that the reader will love him from the off. He is the caretaker of Lausanne Cathedral and this is focus of his life until he sees Katherine Taylor.

Katherine Taylor, a woman who had a very challenging start in life but is now one of the highest class prostitutes in Europe. Somehow her openness and honesty means the reader overlooks her life choices but worries over her safety.

And Jay Harper, a man with no memory but steeped in honour. He doesn't miss his past but finds his strings are being pulled by the head of the Swiss police and while he resents it he accepts it as a "fait accompli".

The author develops these characters brilliantly over the book and when they are in jeopardy you truly share their fears. Even the bad guys are developed to the point where you can comfortably hate them.

If you read the synopsis then you know you are embarking on a fantasy, and like most fantasies it is quite a sizeable read at nearly 600 pages.

As you read you get to about half way through before the fantasy starts to become apparent - but somehow it seems unimportant. During the first half the three main characters' lives start to cross with increasing frequency and a bond starts to build between them. We get to know Marc in detail and get to really understand him, we start to really pity and fall in love Katherine while Jay...? Well the enigma that is Jay becomes more intriguing than ever as the head of police controls him more and more. But most importantly the first half of the story flies past with little or no fantasy evident, and holding the reader's attention in a most compelling manner.

Violence and intrigue increase as the book develops and we learn of why Jay has, as yet, no memory. His memory is restored to him piece by piece as he learns what is expected of him and who he really is.

There are "sex"scenes and strong language but always in context and not in any way gratuitous.

The thickness of the book may seem daunting but put that to one side... The story is continually evolving and deepening and while you may not like the ending for several reasons it is, none the less, a most excellent ending that leaves the reader waiting for the second of the Angelus series.

Truly a fantastic read for lovers of fantasy or for newbies trying the genre for the first time.