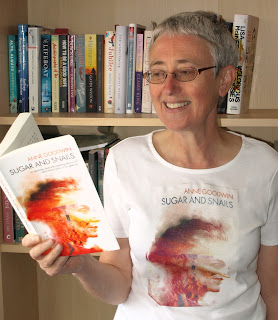 Today we're delighted to welcome Anne Goodwin to the blog to talk about her debut novel Sugar and Snails and the changes it underwent between first draft and finished book....

Three generations of a novel: the transformations of Sugar and Snails from inception to publication

When I worked as a clinical psychologist, I met many people who were disturbed by their failure to live up to their own ideals or the standards set by others. It wasn’t until I moved to a small town in the former Nottinghamshire coalfields that I saw this perceived failure in terms of gender stereotypes. The 1984 miners’ strike had torn communities apart, and the failure of the strike to prevent the pit closures brought both economic and psychological depression in the area and a sense of emasculation among the men.
Around the same time, the country was marking the fiftieth anniversary of the end of the Second World War. Amid the pomp, reports began to filter through of elderly men being re-traumatised by repressed memories of their wartime experiences coming back to haunt them. As my own father was of this generation, I was touched by the notion that the stiff-upper-lipped version of masculinity might be unsustainable and curious about its impact on the offspring of such men.

I was inspired by Evie Wyld’s impressive début, After the Fire, a Still Small Voice, to have a go at writing something similar. Like her, I would explore masculinity and war across three generations but, instead of being set in small-town Australia, my novel would feature the rise and fall of a mining community in England. 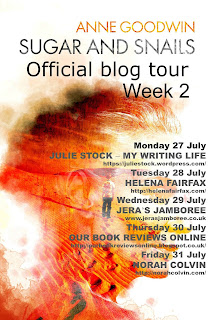 My main character was Leonard, the clever only child of solid working-class parents, brought up to want to be more than a miner like his father, yet always a little ashamed at his mental and physical unsuitability for a job underground. Going straight from school to the army, and from there to a German prison camp, he dreams of the life he’ll have when the war is over: a steady job with a wife and kids.
As I delved more into Leonard’s character, the less need I felt to flesh out the parents who had made him who he was. I was more interested in how he’d fare as a husband and father, and what it was about his wartime experience that he so needed to forget.

So what began as a story of men across three generations was transformed into one about a man, his wife and their problem child. In the early drafts of Sugar and Snails, the story unfolded through alternate chapters set in different time bands: the tale of Leonard and Renée’s marriage over almost three decades interspersed with that of Diana, one of their children, a socially-awkward university lecturer in the early years of the twenty-first century, with a secret troubled past.

One of the problems with this structure was that, because Diana had gone by a different name in childhood, it was difficult for readers to trust that the two strands of the narrative would eventually connect. Furthermore, as Diana’s backstory developed, it came to eclipse Leonard’s, unbalancing the novel as a whole. I was advised to rewrite the novel solely from Diana’s point of view.

I didn’t relish the prospect. It wasn’t so much the extra work – I was starting to appreciate that writing a publishable novel requires numerous re-workings and repeated drafts – but that I had grown attached to Leonard and was reluctant to let his story go. Furthermore, as Diana’s life-changing experience occurs at age fifteen, her parents’ beliefs, attitudes and behaviours have a significant impact on who she becomes. In particular, Leonard’s ambitions for his children are shaped by an event of which Diana would have no direct knowledge, it having occurred at the POW camp before she was born.

Cutting Leonard’s scenes was painful. I’d so enjoyed his solitary hikes in the Peak District; his impatience as a father; his confusion at the funeral of his friend from his army days. But the incisions, and the reworking of some elements, make Sugar and Snails a much better novel. Different readers will find different things within it but I was gratified that one early reviewer felt that “One of the best parts of the novel is her relationship to her father, who is himself troubled by his own actions in the past.” Others, if they look closely, might still detect the theme of masculinity across three generations. But this is very much Diana’s story. I hope you enjoy following her journey towards narrowing the gap between the woman she is and the woman she feels she ought to be.


Anne Goodwin writes fiction, short and long, and blogs about reading and writing, with a peppering of psychology. Her début novel, Sugar and Snails, was published last week by Inspired Quill. Catch up on her website: annethology or on Twitter @Annecdotist.

See photo above for more of Anne's blog tour, read Maryom's review of Sugar and Snails here,  or catch up on the book's launch
Posted by The Mole at 08:25