A God in Every Stone by Kamila Shamsie 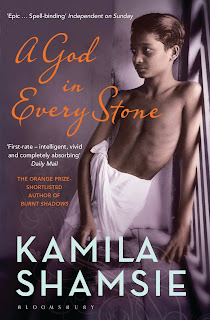 For a young woman growing up in the early twentieth century, Vivian Rose Spencer has had a remarkably liberated upbringing. An only child, her father has brought Viv up almost as he would have done a son, encouraging her interest in history and archaeology, and supporting her desire to study at university.   Now in the summer of 1914, aged 22, she finds herself in Turkey on a dig supervised by an old family friend. The Armenian-Turkish archaeologist, Tahsin Bey has been a familiar figure since Viv's childhood, but away from home under the blue Mediterranean sky, she begins to fall in love. Their idyll is cut short by war and Viv returns to London, volunteering as a VAD nurse. When the stress of treating wounded soldiers grows too much for her, she 'escapes' from the war by heading to India, to excavations taking place near Peshawar, where she hopes to fulfil a dream of Tahsin Bey -  to re-discover the Circlet of Scylax; a highly-decorated silver 'crown' given to the explorer Scylax by the Persian Emperor Darius and lost for centuries.
Meanwhile Qayyum Gul has come from Peshawar to Europe as part of the British Indian army called in to bolster Britain's forces at Ypres. Amid the horrors of the battlefield his loyalty remains firm but the attitudes he encounters during convalescence after a serious injury start to sow seeds of discontent. Invalided home, he searches for a new meaning to his life in the growing resistance to British rule.

A God in Every Stone is a novel of many themes - a search for lost treasure, an exploration of the relationships between men and women, British and Indians, the conflict between personal desires and duty.
It's wonderfully written, brilliant at capturing atmosphere - from battlefield to dazzling Mediterranean - or bringing to life small personal moments, such Qayyum's first encounter with the ancient statues in Peshawar museum but the storyline seems to dart about at tangents.  I don't want to say too much for fear of plot spoilers but I found this threw me a little, and, because of it, I felt my attention wandering in the middle third of the book. New characters are introduced and take over the centre-stage, particularly in the compelling section with which the novel ends.

Throughout I found echoes of EM Forster's A Passage to India; again people are trying to bridge the gap between cultures and Viv has certain qualities in common with Adela Quested - she's mostly well-intentioned but insensitive to others and often accidentally offensive. This is certainly not just a re-working of an old story though, but a powerful novel in its own right - one that I feel will pull me back to re-read several times.

This is one of this year's Bailey's Prize Shortlist; see other reviews below
A Spool of Blue Thread - Anne Tyler