The Living and The Dead in Winsford by Hakan Nesser 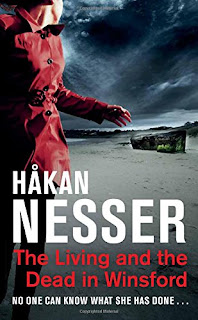 A few weeks ago Maria and Martin Holinek left Stockholm heading for Morocco, hoping to put a scandal behind them and allow Martin time to write his latest novel, one which threatens to reveal scandalous events that took place in a writers' commune several years ago.
But now, Maria is arriving in the village of Winsford on Exmoor, alone apart from her dog Castor, intending to spend the next six months in a cottage just outside the village, but having no real plans beyond taking stock of her life and hopefully outliving her dog. Her life is mainly solitary, taking long walks on the moor accompanied by Castor, but gradually she finds herself pulled in to village life - dinner at the pub, visits to the community computer centre, even the beginnings of a romance. As winter starts to grip the moor though, strange things begin to happen and Maria becomes convinced that someone is stalking her - who could it be? and why?

The Living and The Dead in Winsford is a stand-alone psychological thriller from the author of the long-running Van Veeteren series. This time the setting is Exmoor, but a British winter of fogs and rain proves as 'noir' as any Scandinavian setting; the main character a Swedish woman, Maria, hiding under a false name, running from something dreadful and fearing pursuit.
The story cleverly mixes three threads - why is Maria on her own, no longer with husband Martin? what dark events will Martin's novel reveal? and who is Maria's mysterious stalker? So the reader follows Maria thinking back over the events that have brought her to this cottage on the edge of the moor, discovering along with her, through notebooks and computer files, the secrets that Martin has kept about what happened at a writers' commune back in the 1970s, and fearfully watching for evidence of someone trying to track her down.
The length of the novel gives plenty of space for the author to explore the characters and their backstory in more detail than is often the case with quick-read thrillers, but I still felt a certain ambivalence towards them. Maria didn't ought to be a character for whom I'd feel any sympathy - she has after all committed a serious crime - but I did. On the other hand, as I discovered more about Martin, his secrets and indiscretions, I began to feel he maybe deserved his fate!
Exmoor itself makes an excellent backdrop - one day clear and bright with views out to the distant sea, the next hemmed in by darkness and fog. Come rain or shine, Maria is out on the moor walking her dog, maybe trying to walk away from her past, and the reader gets to experience it in all its moods. Some of the places I'm vaguely familiar with but I was definitely left wanting to visit the area again.
At more or less 470 pages long I'd expected this would prove to be a bit of a lengthy read, so had been rather putting it off, but then I picked it up last Thursday and was so hooked I barely put it down - finishing it the next day!