The Corpse Bridge by Stephen Booth 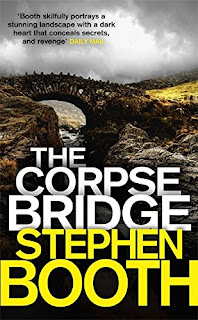 On Halloween night a dead body is found at the aptly named Corpse Bridge over the river Dove; once part of a route from remote villages to the consecrated burial ground, now it's merely forms part of a pleasant walk by the river. Investigating the ground around the bridge DS Ben Cooper and his team stumble upon signs of witchcraft - an effigy laid out on a slab and witches balls hanging in trees. Could the murder be a ghastly addition to the strange rituals, so far only involving animals, going on in the area?

As Stephen Booth is a 'local' author and his "Cooper and Fry" crime series is set in the Peak District not that far from where I live, I've frequently seen his novels at the library and in bookstores but till now I hadn't  picked one up and read it. Spurred on by his event at Derby Book Festival I decided it was time I did!
Jumping in at book 14 of a series is never a brilliant idea but actually I found it easy enough to slip into Ben Cooper's world - especially as the relationship between him and colleague Diane Fry had been discussed at the Derby event. For other new-comers, Cooper and Fry started out together as detective constables, have now grown older, been promoted, and so on. They're a bit like chalk and cheese as Cooper is a local lad, happiest in the countryside, while Fry is only at home in the city and can't wait to be transferred back there. I won't say any more because at the Derby event a member of the audience mentioned something that happened in, I think, book 12 and it's only on reading The Corpse Bridge that I realised just how HUGE that spoiler was, and I don't want to fall into the same trap!
Despite the chilling title, the presence of dead bodies and suspicions of witchcraft, Booth's writing has a cosier sort of feel to it than many crime novels I've read recently - more Miss Marple or Midsomer Murders than The Girl With the Dragon Tattoo or The Killing. That said, grubby city back-streets or twisted psychopaths don't automatically make for a better read, and Sherlock Holmes always feared empty country spaces where no one can hear you scream. I rather enjoyed this first encounter with Cooper and Fry - the plot has twists and turns enough to keep anyone guessing, and the added appeal of a location I know. I now have a lot of back-story to catch up on and I'm looking forward to getting to know the main characters better.