The Life and Death of Sophie Stark by Anna North 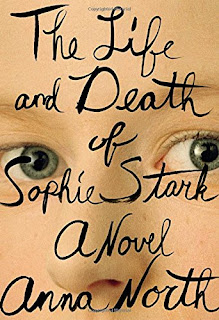 Sophie Stark is a film-maker - one who makes visually engaging, often disturbing, films but is unable to connect emotionally at a personal level - in fact she has always found it easier to communicate through visual art. Starting as a child with drawing, moving on to photos and then film, she uses these mediums to explore and explain the world, drawing on the experiences of others for her story-lines and often exploiting their emotions too.

Her story is narrated by the six people who were closest to her, each with a unique insight into her as a person and director - her brother, the guy she had a crush on in college, her actress lover, her singer-songwriter husband, a Hollywood producer/director and a film reviewer. Their accounts build up a portrait of a talented but disturbed young woman. A misfit who finds difficulty in getting close to people and whose only way of communicating her feelings is through her films, Sophie is a weird mix of tough and vulnerable, small in stature, big in attitude, unable to connect emotionally with others, but someone that others are drawn to. I didn't find Sophie an entirely likeable person - she's a complex character, and although obviously her brother and her lovers care for her, as a by-stander I found her actions and manipulation of others unpleasant.
The author certainly knows how to tell a tale and hook the reader. The story opens with Allison, who goes on to become Sophie's lover and star in her films, telling how she and Sophie first met at an open mic event. Allison is on stage, recounting the tale of a camping trip which went oh-so-wrong - a tale which had me gripped, sent shivers down my spine and set the tone for the whole book.
Each chapter is narrated by a different person, and covers a different time of Sophie's life - from her meeting with Allison, the story moves back to her childhood, then on to college on her first experiment with film, then leaping forward again. Throughout there are excepts from reviews of her films and music videos, which chart Sophie's developing techniques and style, but at the same time still saying a lot about the reviewer himself. After reading these sections, I felt like I had seen the films for myself - the intense moody shots with occasional flashes of brightness; not feel-good films but ones that would leave the viewer moved.
It is a rather dark novel - after all we know from the outset that ultimately the story leads to Sophie's death, that there's unlikely to be a happy ending. Even so it is undoubtedly a gripping book, and one I'd recommend to someone who likes an unusual and compelling read.