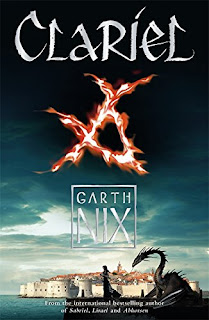 Clariel is not happy at having to move to Belisaere, the capital city of the Old Kingdom, but her mother has been offered a place in the prestigious Goldsmith's Guild there and so the family must go. While her mother insists Belisaere is a place filled with opportunities - for entering a guild or making an advantageous marriage - Clariel finds both the tightly packed streets and her future prospects stifling. She'd far sooner have stayed in Estwael, living and working in the Forest, maybe in time joining the Borderers who care for it.
The city itself is not as it once was - the king is a recluse, and his granddaughter (and heir) has disappeared, leaving a power vacuum into which Governor Kilp hopes to step, with a little help from Free Magic and from Clariel. Soon she finds herself caught up in events beyond her control, desperately looking for a way out and willing to jump at any chance that appears.

I first discovered the Old Kingdom series by borrowing my daughter's books, and quickly became a fan, so when I was offered a review copy of Clariel I leapt at it! Set 600 years before the events of  Sabriel, and effectively 'back story' for the series, Clariel is both a great read for fans of Garth Nix's Old Kingdom series and for new-comers. For fans there's the delight of finding out what happened in earlier times, how certain peoples lives were shaped, and the appearance of many places and characters (I especially liked the early version of Mogget); for new readers, there's an insight into the balance between Charter and Free magic, the role of the Abhorsen, charter mages and the Clayr; for both, a compelling story, mixing problems to which we can all relate with a world of magic and fabulous creatures.
Clariel herself is an intriguing heroine, one who, despite her furious rages and momentously bad decision, I found myself curiously sympathetic towards - she prefers to be solitary, left alone in the forest; life in the city holds no attraction for her. Her parents have made no effort to understand her, and just seem intent on forcing her into what they want her to do, so it's not surprising that Clariel leaps at first one, then another, dubious method of getting her own way - and each time she lands her herself further in trouble.
At times I felt the story moved rather slowly - particularly the time spent at the Academy or putting up with Clariel's maid fussing over clothes - but overall it's a fast paced compelling read, especially in the last few chapters,and one which I loved.