A Year of Marvellous Ways by Sarah Winman 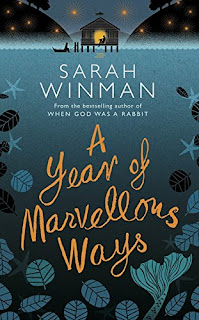 Marvellous Ways has lived in the small Cornish hamlet of St Ophere for most of her life. Despite its size, it was once a bustling sort of place, by 1947 the cottages sit empty and abandoned - only Marvellous in her old gypsy caravan remains. At eighty nine, she lives quietly, alone but not necessarily lonely, swims in the creek each day, and is still waiting for something, although she doesn't know what.
Unknowingly heading for Marvellous's creek is Drake, a soldier returning from World War Two, battered both physically and emotionally by the things he's encountered. Gradually with the help of Marvellous, he begins to recover, and prepare to face life again.

Woven through with magic, with tales of mermaids and long-lost love, this is an absolutely, well, marvellous story. The setting is enchanting, and enchanted, the creek a place of peace and healing, the story-telling lyrical, the whole permeated by myth and magic.

I wasn't sure whether the magic rested in the place or Marvellous herself. She's renowned for her healing, has helped and treated everyone from babies struggling into the world, to the elderly and ill readying themselves to depart. She's both spirit of the place, like a Roman genius loci, and guardian of it.
In sharp contrast, Drake is a rootless, ungrounded person without friends or relations; he never knew his father, his mother died when he was young, the elderly aunts who took him in have passed on too - all that's left is a hope that the cousin he loves might still be alive, despite them losing touch during the war, and a promise to deliver the letter of a dying man.
Throughout I was struggling to recall what, or more precisely which book, I was reminded of. Having given it some thought it's the 'tub of love' from The Enchanted April  mixed with the enchanted pool of The Drowning of Arthur Braxton  All three stories have a mix of everyday and mystical, are as much about 'place' as about people, and are about the healing of the damaged and world weary by peace, tranquillity and a magical something in the atmosphere.

If you like your stories prosaic cut and dry with no mystery or magic, this won't be for you, but from the first page I slipped into this otherworldly place and didn't want to leave.

Maryom's review - 5 stars
Publisher -  Tinder Press
Genre - Adult fiction, literary - but with a touch of fantasy
Posted by maryom at 12:13