The Jump by Doug Johnstone 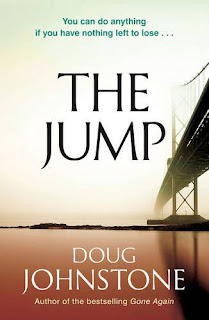 Six months ago, Ellie's teenage son committed suicide by jumping off the Forth Road Bridge. While her husband distracts himself by searching down suicide conspiracy theories on the internet, Ellie can only find peace in physical activity. Everyday she walks from her South Queensferry home down to the shore then up to the Bridge, in an endless loop. One day she sees another teenage boy, Sam, standing outside the safety barriers, ready to jump, and instinctively she goes to help. She talks Sam down, takes him home, offers him shelter ...and then discovers the family mess he was running away from....

I read somewhere that director Ron Howard likes to make movies about ordinary people caught up in extraordinary situations - think of Jim Lovell and crew in Apollo Thirteen, or James Hunt and Niki Lauda in Rush. Now, to my mind there's an echo of this in much of Doug Johnstone's writing - a normal, ordinary person, one you might pass a million times on the street and never remark on, takes a step outside their everyday routine - and gets caught up in something way above their head! Whether it's a whisky-sampling holiday on Islay going pear-shaped in Smokeheads or a car accident that brings down the wrath of local gangsters in Hit and Run there always seems to be violence and mayhem lurking just under the beneath the surface of everyday life and waiting to burst out. What I love about Johnstone's novels is that you almost believe it could happen to you!
Ellie is a character that I feel will stick in my mind for a long while. Feeling she has little left to live for after the death of her son, she's willing to risk everything for another unknown youngster; both her overwhelming grief and dogged determination are convincing and believable.
The setting is, as in so many of Johnstone's novels, important and well-captured. South Queensferry isn't a place I know well (I visited once for an afternoon) but I really felt I was there, in a village of old fishermen's cottages and newer seaside builds, dominated by the massive bridge above, a brooding, threatening presence in Ellie's life.
I sometimes feel Doug Johnstone isn't very well known outside Scotland but he certainly deserves to be! If you haven't discovered him yet, why not?