The Kindness of Enemies by Leila Aboulela 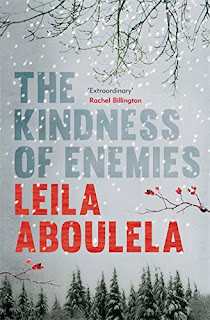 Natasha Wilson has a confused heritage - part Russian, part Sudanese, brought up in Khartoum then moving to Scotland when her mother divorced and re-married, choosing to take her step-father's name rather than keep the politically sensitive 'Hussein'. At every step, she's chosen to move away her Muslim roots, to become more westernised but still something lures her back. Now a lecturer at a Scottish university, her specialist interest is the mid-nineteenth century conflict between Russia and the Muslim hill tribes of the Caucasus region, and particularly the charismatic freedom fighter, Shamil.
By an odd quirk of circumstances, one of her star students is a descendant of Shamil. Oz (a more 'acceptable' shortened version of his given name, Osama) has grown up venerating his ancestor, seeing him as a champion of Muslim ideals against imperial expansion, but this hero-worship is leading Oz towards modern-day Islamic extremists and the notice of Special Branch, and when one person is suspected of terrorism, all their friends and associates are too.....
Things are no easier back in 1850s Russia - Shamil's eldest son, Jamaleldin, was taken as a hostage by the Russians and, for fifteen years, brought up in the Imperial Court. Jamaleldin has grown up exactly like any other young nobleman - dancing, drinking, playing cards, falling in love -  but now his father has a plan to bring him back to the high mountain fortresses of Dagestan. Will this be a joyous home-coming, or a shock? How will a rich man-about-town fit back in with tribal hills-people? The plan depends on yet another character who finds themselves caught between two cultures - Anna, Princess of Georgia, was never entirely happy with the way her countrymen made peace with the Russians, now, abducted and held hostage by Shamil, she begins to question which side of the conflict is in the right, and where exactly her loyalties lie..

The Kindness of Enemies is an amazing thought-provoking read, a mix of present day and historical fiction, about the dilemma of being torn between conflicting cultures but never quite belonging totally to either, and how sometimes accepting defeat is braver than fighting on.

A bit of a slow-burner, it took me a while to become involved and begin to care for the characters - but as this amazingly varied cast came to life their stories had me hooked; from fiercely proud war-lord to modern university lecturer, sheltered princess to eager enquiring student, the troubles and choices they face are similar at heart.  Is it right to have a favourite? Well, regardless, mine was Shamil - strong in his Muslim faith and attachment to his homeland, he's torn more between aspects of his personality; being a charismatic, brave leader doesn't always fit comfortably with being a caring, even sentimental, father.

From an historical perspective, the story sheds light on a war that seems forgotten and over-shadowed, in my long-ago history lessons at least, by the Crimean War. In one of those many instances of 'my enemy's enemy is my friend', the British government are eager to help Shamil as he stands in the way of Russian expansion towards India, but when their attention is diverted to the Crimea, Shamil is left without support - it feels like all too familiar a story with many echoes in today's conflicts.

Winning this, shortlisted for that, longlisted for something else, I can't really think what my excuse is for not having discovered Leila Aboulela before; I need to do some catching up!