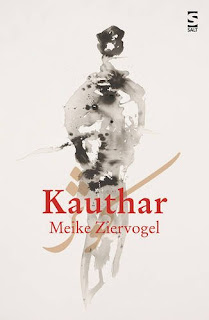 All her life Lydia has been looking for something to which she can dedicate herself. As a child she wanted to follow her father and become a champion gymnast, to gain the adulation and admiration of a spellbound crowd. As an adult, trying to regain her self-respect after a disastrous affair, she discovers Islam - the cleansing and prayer rituals, the rules by which she must live her life offer a framework within which she can lose herself and find love.
Lydia changes her name to Kauthar, wears hijab, marries a Muslim Iraq-born doctor and her life seems complete. But somehow she still doesn't feel quite fulfilled - maybe a child will fill the gap, or joining her husband helping the injured in his war-torn home country.....  What Lydia/Kauthar encounters there leads her towards what she sees as the ultimate sacrifice of self but others view as terrorism.

It's a bit flippant to say that Meike Ziervogel likes to explore the concept of  'women behaving badly' but here again, as with Magda, she does just that. The book opens, as it ends, with a suicide bombing - a horrific act, designed to shock and terrify, but that leaves us wondering why would someone do such thing. Through hate, or a desire for vengeance? well, from Kauthar's perspective it's an act of love. The story doesn't dwell on the sensationalist aspects  - the scattered body parts or the number of dead and injured  - but is interested in that question "Why?"
There's obviously no easy, one-size-fits-all answer but the author offers a plausible account of how one well-educated, white British woman might come to commit such a devastating act. Moving between childhood and adult years, the reader follows Lydia/Kauthar's life, trying to understand her, her reasoning and motivation, the psychological triggers that have pushed her and shaped her. As before in Ziervogel's work, there's a hint of the troubled relationship between mother and daughter. Lydia feels closest to her father, and her mother frequently seems dismissive of Lydia, belittling her and her aims and ideals as both child and adult.

In 144 pages, the author draws a portrait of a woman struggling to fill an empty, gaping hole in her life - there never seems to be enough, or maybe the right sort of, love, to satisfy her need, and in desperation she twists her religion to fill that void.  This is without doubt another stunning, thought-provoking novella from Meike Ziervogel. Like those she publishes, the stories she writes tackle subjects that others might shy away from; they may be short but are deep and satisfying  - it doesn't feel an extra page or dozen would add anything.

There's a proverb (French I think) that claims that to understand all is to forgive all - and Kauthar (again like Magda) has committed an act that feels impossible to forgive. I certainly felt I understood Lydia/Kauthar but would I be able to forgive her? I don't think so.