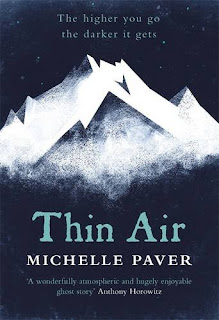 
In 1935, a five-man British expedition sets off to the Himalayas to climb Kangchenjunga, the third highest mountain in the world and considered by many mountaineers to be more treacherous than even Everest. Previous attempts to reach the summit have been plagued by disaster and death, particularly a British expedition of nearly thirty years before during which five men died but the leader, Lyell returned home to glory for his efforts.

Stephen Pearce has only been asked along at the last minute by his elder brother, Kits, to fill the place of team doctor, and he isn't as experienced a mountaineer as the other climbers. He's eager and willing though, especially in the hope of proving himself capable in Kits' eyes, and wanting to escape various personal complications back in London. A chance meeting with Charles Tennant, last surviving member of the ill-fated Lyell Expedition,, leads Stephen to believe that strange things occurred which were never revealed in the 'official' publications about the trip ...and the scene is set for a harrowing climb. He is almost immediately on edge, believing their party is being watched, and as they begin the real ascent, and altitude sickness starts to kick in, his fears grow ...

Thin Air is a combination of adventure and ghost story, full of period detail - from the attitude of the British team towards their 'inferior' sherpas to the unappetising pemmican suppers eaten on the mountain -  and after a slow start, setting up the background with dark hints of what occurred on previous expeditions, and the long-held rivalry between the two brothers, turns into something terrifying in so many ways;

- the sheer height and mountaineering dangers for starters. The precipitous drops, crevasses in the glacier ice, the narrow camping places where I felt they could roll over in their sleep and fall hundreds if not thousands of feet, cornices where the snow builds up a 'shelf' ready to collapse under too much weight; the physical dangers are very real and well captured.

-  Cedric the dog - why let a dog go along? Ok it turned out the dog was based on a real life canine companion who followed an expedition up to 24, 000 ft (!) but authors are so often happy to kill off an animal while saving humans that a lot of the time I was petrified for him.

- Oh, and then there's a ghostly, malevolent presence on the mountain. Paver builds up to its appearance gradually, as first Stephen tries to dismiss it as his imagination running wild or altitude sickness disturbing his senses but gradually comes to believe that someone or something is stalking their group, and, even if the other men can't see it, Cedric the dog knows there's something out there - and he's terrified when it approaches.

If you've read Michelle Paver's previous ghost story Dark Matter, you'll know how well she can build a creepy, unsettling atmosphere - and she's done it again here, in a very different environment. I for one couldn't put the story down but needed to read on to the final resolution before trying to sleep!