The Ice Lands by Steinar Bragi 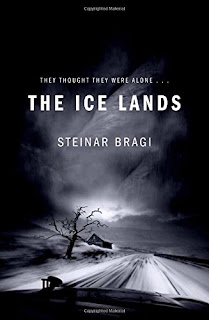 Four thirty-something friends have headed off into the wild interior of Iceland on a camping trip. The two guys, Egill and Hrafin, have been friends since childhood, and over the years have had their falling-outs and getting-back togethers but old resentments still linger; their partners, Anna and Vigdis, are comparative strangers who don't really get on. The trip is supposed to be a time to bond, as a group, and with nature, but Icelandic nature can be inhospitable, tempers are quick to flare, and an argument and the sudden dropping of heavy fog lead to their jeep crashing into a farmhouse. The four seek refuge inside, but the elderly couple who live there seem strange, insisting on barricading the only door at night for fear of something which lurks outside. As the group's attempts to get back to 'civilisation' fail time and again, the behaviour of the couple becomes even weirder, and the odd things found in the vicinity - dead animals, an abandoned village, piles of bones - lead them to wonder what exactly they've inadvertently discovered.

The Ice Lands is a mix of psycholgical thriller and horror tale following that well-tested plot in which city folk head off into the wilds and encounter more than they'd bargained for - think Blair Witch Project or House of Wax, depending on your preference in horror. So, I'd expected something straight forward along these lines (and if it's done well I do love a good horror) and there are a lot of very creepy moments as, splitting into various sub-groups, the friends explore the area, try to drive or walk to the nearest town, and end up circling back to the strange farmhouse that sits at the centre of this puzzle. Intermittently the story line is broken by flashbacks to the past histories of the four, and I somehow assumed these were irrelevant - just so much padding to lengthen what would have been a short story - but the ending made me realise I'd been wrong-footed; I changed my mind, decided they WERE an integral part of the overall plot, and wished I'd paid closer attention to them. For this is a story with a very odd ending - the sort that makes you reassess everything that's gone before and leave you wondering how much was 'real', and how much was taking place in someone's mind.
The other stand-out feature is the barren, sandy terrain of Iceland. The volcanic landscape is totally hostile to life; no trees or grass, just mile after mile of empty dessert where a breeze can easily whip up and impenetrable sand storm. Definitely not the place for your car to break down!