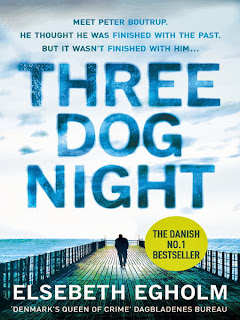 Ex-convict Peter Boutrup wants to move on, forget the past and live a quiet respectable life - but things are rarely that easy, are they? First an old friend turns up talking about a lost treasure, then while out walking his dog Peter finds another old acquaintance  dead at the bottom of cliffs - and his reclusive neighbour Felix seems to know more about this than she's telling. At the same time, a local girl has gone missing and a body, which may or may not be hers, turned up in the harbour.  Can all these things be related? It looks like Peter's dreams of a rural idyll are going to be on hold for a while.

Three Dog Night is a complex thriller set against the backdrop of Denmark's coldest winter. The story moves from two directions - that of Peter and his neighbour Felix, and that of the police department who are investigating matters from a totally different angle. As the two begin to merge things turn bloody and brutal. It's a compelling read that goes beyond the mere working out of whodunnit and why, to create a whole cast of characters, each with their own secrets and foibles.
There's such an array of wonderfully drawn characters that it's difficult to know where to start; Peter himself with his dreadful children's home upbringing and desire to leave his past behind; widowed amnesiac Felix, mourning the death of her husband and daughter; local police chief Mark Bille Hansen, down-sizing his career due to health issues and his former lover from Copenhagen, now his superior, and a potential new one, Kir, the local girl and army diving specialist. It feels  not so much like reading a book as slipping into a new town and playing 'fly on the wall'.
This is the first in a series featuring Peter Boutrup and I don't think we've heard all there is to know about Peter's time in prison or the reason he was there in the first place, and I expect the other characters will be back too.

It's the sort of thing we all love from Danish TV thrillers, but in a book!

from Amazon
Posted by maryom at 09:49