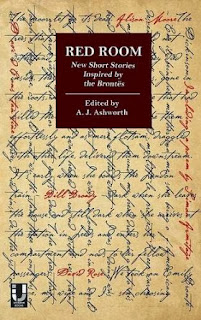 This collection of 12 short stories and a poem takes its name from the Red Room to which Jane Eyre is banished as a (supposedly) naughty child. The heavy, gloomy furnishings in it provoke horrific nightmares for her - but don't worry this isn't a collection of horror stories. Taking the Brontes lives and works as a starting point and set in various time frames from the nineteenth century to the present day, these stories jump off in totally different directions - some funny, some full of anguish and loss - old favourites re-imagined in new settings or with new endings, two fictitious incidents from Charlotte's life, a poem for Emily and the rather strange 'Shower of Curates' which defies categorisation but takes the first lines of all the Bronte novels and works them together with a bit of artistic license. For the most part it's clear which novel or incident provided the inspiration but, if in doubt, there are notes from the authors explaining what sparked their ideas.

What did I think? Reader, I loved it! The echoes of the originals shine through but it isn't necessary to be a Bronte expert to enjoy these stories as they are complete in themselves. If, on the other hand, you're a total fan you won't find your favourites trashed and trampled out of all recognition. I thought some of the stories cast an interesting light on their sources, particularly on aspects that are swept over by film and TV adaptations in favour of a more romantic story-line - I'd like to go back and re-read Wuthering Heights and Jane Eyre with some of these thoughts in mind.  My only quibble would be that, as rather tends to happen, Anne is ignored for her more famous sisters and maybe brother Branwell would have had a story of two to tell?

When we think of the Bronte family, we associate them with the parsonage at Haworth but they were born in Bradford, at 72/74 Market Street, Thornton. The Bronte Birthplace Trust is hoping to raise enough funds to buy this house and secure its future. This collection was put together with the aim of supporting their efforts and a percentage of the proceeds from this book will be donated to them by Unthank.