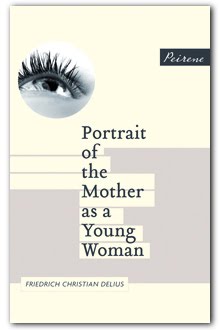 a new view from Maryom

I always say this - Portrait of the Mother as a Young Woman by Friedrich Christian Delius and translated from the German by Jamie Bulloch - is my favourite of all Peirene's books, so I approached a re-read with a little bit of trepidation - would it live up to my expectations or would I be disappointed?
Well, all the aspects I loved first time are still there - the slightly rambling, all-encompassing thoughts of this young German woman as she makes her way across Rome in January 1943. Having travelled from Germany's Baltic coast to join her husband, she's almost immediately been left alone as he was transferred to North Africa. From a pious church-going background, she's used to accepting the opinions of others - first her father's then the dictates of the Hitler Youth leaders - but now she's almost alarmed to discover thoughts of her own, that might not accord with either; her dominant wish, that her husband could find a safe posting in which to serve out the war, doesn't seem at all in keeping with German martial feelings. Rome itself is a bafflement to her; a mix of pagan and Catholic style, it seems exotic and sensual, and nothing in her Lutheran up-bringing has prepared her for it- merely walking unaccompanied through its streets seems an act of daring.

Other aspects also struck me this time - most importantly Rome itself as more than a mere backdrop, almost a character in its own right; the route taken from Via Alessandro Farnese to Via Sicilia is given in such detail that every step of the way can be followed (on Google maps if not on the ground), and the sights and sounds are there before the reader's 'eye's'. I also was more conscious of the probable future awaiting these expectant parents; even assuming they both survive the war, their prospects are unlikely to be the rosy ones dreamt of.

I intend throughout this coming year to reread all of Peirene's catalogue, so although for now I'd still say this was my favourite my thoughts may change...