The Reaper by Steven Dunne 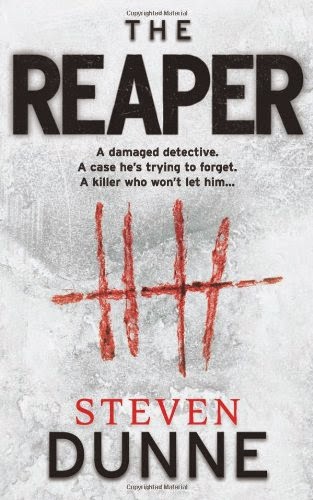 DI Damen Brook thought that by leaving the Met and moving to Derby he could put his past behind him ...but he's about to be proved wrong. When a Derby family are brutally murdered in their own home, Brook can feel a familiar hand behind it - that of the Reaper, a killer Brook hunted for so long without bringing to justice. After so many years, why would the Reaper move his attention to Derby? The only answer is that he's out to deliberately provoke Brook ....

Although this is the first outing for DI Brook, I've already encountered him in later books in the series ( Deity and The Unquiet Grave ) so I vaguely knew the turn events would take, but even so The Reaper proved to be a really compelling read.
A psychological thriller that delves into the minds of both ruthless killer and the detective hunting him down, it's dark, brutal and shocking in a variety of ways. I don't want to risk giving the plot away, or the chilling twist of events, but on one hand there's the despondency of police officers who see so many outrages that they become numb to the horror yet are powerless to prevent it, and on the other, the complacency of a killer who believes himself to be above the law - all very grim disturbing stuff and not for anyone who likes their crime to be 'cosy'.
As I say, I'd met Brook before and wondered how he'd turned into the scarred lonely individual of the later books - well, even the younger Brook is a strange man, obsessed by a series of killings, abandoning his family to stalk the man he believes committed them, who in his turn, manipulates Brook and turns him to suit his own ends. I'm just surprised Brook hasn't turned out even more twisted!

If you're intrigued by Brook and his pursuit of the Reaper, you can read more in this interview  with author Steven Dunne.