The Life I Left Behind by Colette McBeth 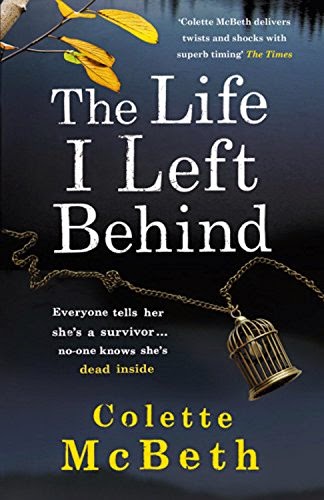 It's five years since Melody Pieterson was attacked and nearly died.In those five years she's become a new person; she's barely able to leave the house on her own, has come to distrust her own judgement to the extent that she can hardly make a decision about the simplest thing, but on the plus side, she's in a new relationship and about to get married. But then, mere weeks after Melody's attacker is released from jail, the body of another women is found; she looks like Mel, is found in similar circumstances, and, like Mel, is found with a bird cage necklace. This woman was called Eve Elliot, and she was helping Mel's attacker in his attempt to clear his name - could he really have struck again?

The Life I Left Behind is told from three points of view - Melody's, investigating police officer DI Victoria Rutter's and, from beyond the grave, Eve Elliot's. The only drawback to this is that if we could have asked Eve straight out Who did it?, she could have told us - but of course there'd be very little story left then! As it is, events unfold from the three women's perspectives.
I found Melody to be the most interesting of the three - she was always dubious about the identification of her attacker but, having no memory of that night, had to accept the evidence the police presented her with. This is what lies at the heart of her current situation - having once been so mistaken about a person, how can she trust her own judgement on anything, no matter how trivial? From being a lively, out-going person, she's become virtually a recluse, and the luxurious new house built to her fiancé's specifications has begun to feel like a cage. When Melody hears of Eve Elliot's death while investigating a possible miscarriage of justice in the sentencing of her, Melody's, attacker, it brings the past and all Melody's doubts back to life. Maybe the police had been wrong all along.
Meanwhile, investigating Eve's death, DI Rutter finds herself doubting the original investigation too - even though she played a part in it.
And so the three threads wind together, upping the suspense towards a nail-biting climax.
I liked this more that Colette McBeth's debut thriller Precious Thing The characters seemed more rounded and believable, even given that one was dead, and Melody particularly was a disturbing portrait of how violence can change a life completely.