The Sons of Rissouli - Matt Cartney 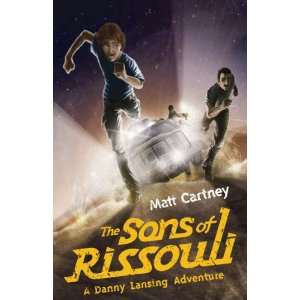 One for the boys
Review by The Mole

Danny's mum and dad have died and his uncle Angus has taken charge of him. Angus is an investigative reporter who goes anywhere at the drop of a hat and has hair raising adventures. Danny has always admired his uncle and should be in heaven but... his uncle now owns a 4x4 that is pink and has a slogan "your sewage is our bread and butter" emblazoned on the side - not every boys dream.

Angus is approached to investigate how guns are appearing on the streets of the UK and so decides to set out to investigate. The problem is he can't leave Danny behind so he sends a totally unbelievable note to school and takes Danny with him to Morocco. One thing leads to another and massive adventures follow.

Packed with adventure and humour this book will delight all young boys and as an added bonus - just for them - not a giiirrrll in sight. The violence is not overplayed or gory and the plot is not complex and twisting and requiring a notebook to keep track of - it is just straight honest to goodness adventure.

I was told this is "Boy's Own" stuff and that is so true except Biggles, Dan Dare et al were always role models to aspire to whereas this is a lad of an age the reader can identify with.