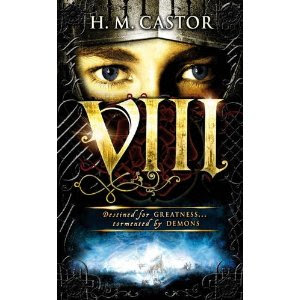 Behind the image of Henry VIII
review by Maryom

We all know about Henry VIII, or think we do - the piggy-eyed chap with the many, many wives, who spent his time chopping off heads. But do any of us stop to wonder how he turned out like that? This is exactly what HM Castor sets out to do in VIII.

Starting with a small boy hiding in the Tower of London from the rebels trying to dislodge his father from the throne, this novel traces the influences on Henry and their possible impact on his character - his father's tenuous hold on the crown, his upbringing as 'spare' rather than 'heir' and his sudden catapulting into prominence upon the death of his brother, Arthur.

The period and characters are brilliantly brought to life in a way never allowed in a non-fiction book. Telling the story in the first person from Henry's point of view lets the reader get behind the politics and power struggles of the time and see Henry as a person - just one who happens to grow up to be king.

An outstandingly readable account of Henry's life - I was hooked from the start. Admittedly it's written for Teens but I'm sure any adult who found Hilary Mantel's Wolf Hall just too long and demanding would love it as well.

from Amazon
Posted by maryom at 13:18