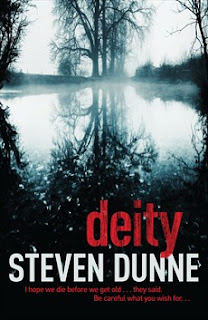 A Bit Too Close To Home
review by Maryom

When a body is discovered in the River Derwent not far from Derby, the police at first assume it was a suicide - until they discover the body has had its lungs removed! As DI Damen Brook opens, what is in all but name, a murder investigation among the down and outs of Derby, other strange events are happening in the city. Kyle a student at the local college is  reported missing and the police are at first inclined to treat his disappearance as nothing to be very concerned about until they realise several of his friends are missing too and they all had links to a mysterious organisation, Deity - which promises a way to live forever, offering these youngsters not merely their 15 minutes of fame but immortality.  'Young. Beautiful. Immortal.'

To say I found Deity gripping doesn't quite cover it - I was absolutely hooked from the chilling opening scene. I've always read a lot of thrillers but rarely have I found anything this disturbing. In part this may be down to the location - Derby is where I live and Dunne describes locations accurately enough that I could plot the moves of murderer or police. There's a nice mention for Waterstones in case you need to find a bookshop in town but I was rather concerned that the murders may have been taking place at a friend's house! I wonder if the residents of Oxford and Edinburgh have felt this way over the Morse or Rebus novels.

But the aspect to bring chills to anyone, anywhere, is that of a psychopathic predator on the loose playing with people's minds and twisting their needs and desires to his own ends. In both plot-lines the weak and vulnerable are played and preyed on in this way by an evil manipulator disguised as someone offering help; the down and outs exploited through their basic need for a clean, comfortable bed; the teens through their obsession with fame.

All in all, a very cleverly plotted novel. The reader is allowed to see 'behind the scenes' somewhat - to know what the missing students have been doing and planning - to know something behind the disposal of the corpse in the river - but the ultimate denouement still comes as a surprise.

Steven Dunne is a brilliant new find in crime thriller fiction and I'm hoping to read much more from him. My teenager thinks his next book should be set in our part of Derby. I'm not so sure myself - I'd probably never dare to go out again!