The Calling by Neil Cross 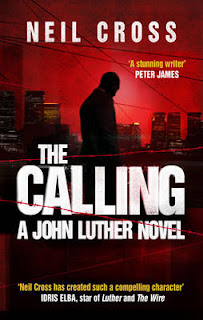 An extraordinarily brutal double murder leads John Luther on a hunt for a very perverse baby snatcher. At the same time an injured colleague asks him to unofficially help an old man being bullied into leaving his home. In desperation he resorts to increasingly 'unconventional' methods and as his professional life descends into turmoil, his private life follows.

The Calling is a prequel to the BBC Luther series, filling in the 'story so far' which was hinted at on TV but never expanded. Cross has also worked in a clever link to an incident in his novel, Captured (which I feel very clever to have spotted while wondering if there were links to other novels which I missed) An unusual aspect of the creation of Luther is that the character started out in a screenplay and  was 'fleshed out' by Idris Elba's portrayal, something that Neil Cross refers to in the Acknowledgements. With a few brief descriptive comments here and there, Neil Cross now brings the composite character back to life in print. It doesn't matter though if you've never seen Luther as The Calling works perfectly as a stand alone novel and an introduction to this harrowed, angry detective.

Don't be misled into imagining The Calling is a cosy whodunnit crime novel as you might expect from a Lewis or Midsommer Murders spin off.  It's a VERY violent and brutal story - not at all for the squeamish or easily upset. Not only is there a psychopath out there but he seems to have a network of contacts all as deeply weird as he is. Luther himself is a tormented, emotionally tortured man in whom the violence of the crimes brings out a correspondingly violent response.
A book that left me feeling stunned and emotionally battered. For one thing, I felt Neil Cross managed to portray the victims as real people about whom I cared, rather than mere dead bodies. It is though, without doubt, a gripping, mesmerising book.

from Amazon
Posted by maryom at 12:02