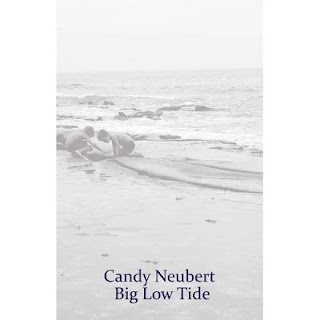 On the small Channel island of Port Victoria everyone knows their neighbours' secrets. it's barely possible to walk down the street or argue behind closed doors without someone noticing.

In this atmosphere live Peter, his estranged wife Brenda and their two children. Unable and unwilling to cope with the demands of motherhood, Brenda has abandoned the old family farmhouse and now lives in a flat in town, working as a barmaid. She's also found herself a new boyfriend - even if he doesn't seem to share her feelings.

My review copy of Big Low Tide arrived with a press release quoting the synopsis which appears on Amazon - "In Candy Neubert's novel 'Big Low Tide' set on a small island in the Channel, Brenda, a feisty barmaid at the local pub suddenly finds herself raising her two young boys alone as her estranged husband, Peter, realizing he cant take the children with him leaves for Ireland in search of better prospects and a trip at sea. Worn down by the constant struggle and pregnant with a third child whose father is nowhere to be seen, Brenda's spark begins to dwindle and her children become more and more unruly. No longer able to cope she moves in with her sister in law, Elsa, who without warning walks out one day leaving the run of the house to Brenda. Seeing Brenda's slow decline, a friend persuades Peter to return and soon after on a wild and windy night, her youngest son disappears. As they search for the boy little do they know how close they are to finding something dark and terrible."

Having read this, I had expectations of what the plot would be, how it would evolve and, even to a certain extent, conclude. Therefore, I was considerably wrong-footed as half the book passes before these events unfold. I think this spoiled  my appreciation of the story as a whole - it is much more one of father/son bonding, of a woman's renunciation of her children and obsession with a new boyfriend and unbreakable ties to the island.

I loved Neubert's descriptions of the island, zooming over it with a bird's eye view and her image of it as an amoeba-like entity, drawing its sustenance in through the port and washing away its waste with the tide.
Big Low Tide is a book I want to come back to at some future point as I think it will improve with further acquaintance.

from Amazon
Posted by maryom at 13:44