Before I Go To Sleep by S J Watson - re-read 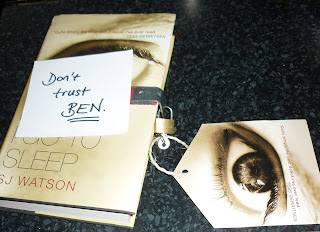 As I was taking my copy of Before I Go To Sleep up to Edinburgh Book Festival, hoping to have it signed by S J Watson, it seemed only sensible to read it again. I was a little curious about how well the story would work second time round as I now know all the plot twists and I also wanted to take into account some of the criticisms I've read from non-fans.

Second time through I found the story just as compelling as the first. I thought there were hints and clues to be picked up along the way that I'd missed first time and in some ways knowing how everything would end increased the tension. I don't want to run the risk of spoilers but I felt at times like shouting "he's behind you" or some such warning to Christine.

As for criticisms I've heard. Someone actually found Christine's wearing of tights under trousers to be a major credibility-fail. It isn't for me as I know women who do this. More worthy of consideration is that some readers didn't believe in the feasibility of Christine's diary - of how she could maintain it. In part, even first time round, I was prepared to accept this with a little suspension of dis-belief. After all, it's mainly a plot device to tell the story through Christine's eyes - if a different character had told it, all the plot twists would have been given away on the first page! And the up-coming film with Nicole Kidman? I think it should work well. As I re-read I tried to envisage Kidman as Christine and found myself thinking of her role in The Others - a very creepy ghost story with a twist at the end that completely alters all that went before, much like Before I Go To Sleep in that respect. 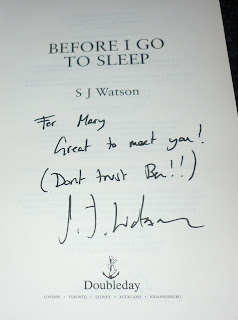 As you can see from the photo above, my copy of Before I Go To Sleep is a rather special one with padlock and key sent out by the publicist to reviewers. It's now extra special as it's been signed by S J Watson himself. It was great to meet him at last, even if only briefly as he had quite a long line waiting to have books signed. I'd chatted to him before via Twitter and was curious to know if he'd at last seen 50 First Dates. He had - and said he thought his novel was more like that would be as Drew Barrymore's character aged, than my theory which is that Before I Go To Sleep is what would happen if Adam Sandler were evil!