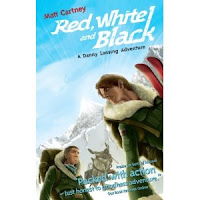 The Adventures Continue
Review by The Mole

Danny and his Uncle Angus learn of a war time briefcase lying buried on a Norwegian mountainside and tempted by the adventure of finding secrets that must no longer have value except as a story for the newspapers they set out to find it. Before long they are pursuing "Adler Kommando",  a group of terrorists that are about to threaten the lives of thousands of people.

For those who haven't read Sons of Rissouli you won't have met Danny Lansing - a young boy who has been orphaned and now lives with his Uncle Angus. Angus is an investigative reporter who travels the world pursuing stories and takes Danny with him - regardless of the school calendar!

Readers of Danny's first adventure will find his second adventure even better and this time we go from the the hot deserts of the the first story to the cold snowy wastes from Norway to the Alps and to Poland (occasionally returning to Angus's home in Dunkeld, Scotland). I found myself wanting to be there because so much of Danny's adventures are accessible - if you're fit and adventurous then you could be out there doing them, apart from coming up against terrorist organisations... please keep well clear of them!!

Absolutely fabulous adventure once again from the "Boy's Own" era that will have readers hankering to learn to ski and climb and get out there and do it.

Highly recommended to ALL readers of adventure stories. And apparently girls love Danny too!