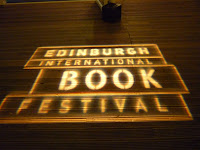 This year we timed our annual holiday so as to spend a week in Edinburgh to take in events at the festival as well as meet people and step outside a bit and enjoy fringe events too.

The first week was to be our week and we set aside just 3 days to attend the festival but what we didn't realise is that the festival is actually addictive and that we quickly changed that to 6 days, so if you plan on attending the festival at all then be warned!

We met and made a lot of friends and attended events and book signings and here are but a few.

i) Alan Bissett - Maryom chatted about Pack Men and how it is not just for male football fans. We also saw Alan at the Festival Cafe (a BBC Scotland radio show) where he talked about and performed a brief excerpt from his one man fringe show for arachnophobes - extremely funny, catch him if you can.

ii) Barry Hutchinson - We talked with Barry and other Scottish authors about the difficulties caused by branding books as 'Scottish' and how buyers in England avoid such books for some reason perhaps in the belief that they are "all haggis and tartan".

iii) Linda Strachan - We chatted about many things and had a sneak preview of the cover for Don't Judge Me, her next teen novel to be published by Strident in Autumn.

iv) Keren David and Cat Clarke talked about motivations for writing, methods of writing and other things and read from their latest books and The Mole discussed with Cat Clarke the character with which she identifies and although we disagreed on choice her father was in agreement with The Mole.

v) Keith Charters  - We chatted at length on many subjects surrounding publishing and many NOT publishing related.

vi) Matt Cartney - We chatted about several things... but more on this meeting in a later post.

vii) Edward Wilson talked of his route to writing spy thrillers and read from his  book.

viii) James Mayhew - We saw him story telling and painting in a way that he does so well.

ix) S J Watson signed Maryom's copy of Before I Go To Sleep and chatted about it and the publicity campaign surrounding it.

And one of the great things is that at the festival you can meet so many people by chance..while in the yurt, apparently Neil Gaiman walked past and we missed him, we brushed passed and chatted with Nicola Morgan in the bookshop and we met and chatted with Victoria Campbell as well as brushing past an Archbishop.

The problem is that you cannot do everything you want to do and we missed many people. There were also so many authors and friends we would like to have met in the second week, but sadly due to the GCSE results day in England then it had to be the first week only.