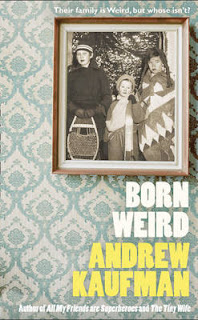 When they were born Annie Weird gave each of her grandchildren what she believed to be a blessing; to always be safe, have hope, never be lost, to forgive everything, to be strong. Now Annie has come to believe that these blessings were nearer to curses and wishes to gather all of her grandchildren to her bedside so that at the moment of her death - the date and time of which she's exactly predicted  - the 'blessings' can be lifted. So favourite grand-daughter Angie is set the task of assembling them all. Achieving this is harder than it sounds - the Weird family have gone their separate ways and not seen each other in years but after a brief demonstration of Annie's powers, Angie is convinced that the seemingly impossible must be undertaken.

Born Weird is a rather difficult book to define - it's a light-hearted read looking at a serious subject; a quirky story of family life that explores the concept of too much protection being a bad thing but with a 'fairy-tale-gone-wrong' feel to it. The blessings bestowed on the Weirds by a well-meaning grandmother have turned over the years into curses - "blursings" is the word they coin for it.  Being sheltered from the knocks and blows of life has stopped the Weirds fully engaging with it and finding their 'happy ever after'.
Is it enough to say that I really, really enjoyed this book? It had oddly been sitting on the TBR pile for some time but once I picked it up I didn't want to put it down - or for it to end.

I can't think of another book to liken this to but if I were comparing it to a film I'd suggest two of my favourites - Juno or (500) Days of Summer.

The author's previous novel, The Tiny Wife, is a book that I've had on my radar as a 'must read' for some while - now I really mean to track it down.

from Amazon
Posted by maryom at 11:00