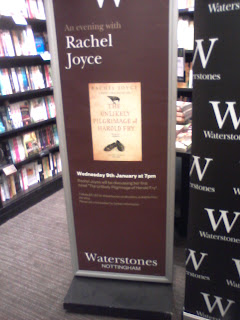 We started this year's round of literary events at an evening with Rachel Joyce held in our (almost) local Waterstones as part of the promotional tour for the launch of The Unlikely Pilgrimage of Harold Fry in paperback. This is the second time we've seen her as she appeared along with ML Stedman at last year's Lowdham Festival

A lot has happened since then for Harold Fry - being one of Transworld's biggest sellers of 2012, an audio-book version produced read by Jim Broadbent, selected for the Man Booker longlist, winner of the Specsavers National Book Awards 'New Writer of the Year' 2012 and now chosen for Richard and Judy Spring 2013 Bookclub .... all of which has all led to an unexpectedly busy promotional year for the author.
There's also the exciting prospect of a film sometime in the future - rights have been sold to a British company and, if produced, will be shot in Britain and feature British actors of appropriate age.

As a 'solo' performance this event was quite different to the last, with different topics covered. Things started with a chat-style interview, followed by a reading from the beginning of Harold Fry's journey. There was of course time for questions from the audience and their response showed that Harold Fry is a book - and character - loved equally by men and women. A brief mention was made of Joyce's upcoming next novel, Perfect, to be published  later this year and the evening concluded with a book-signing.