All The Birds Singing by Evie Wyld 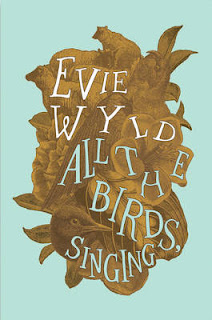 Jake Whyte is the sole resident of an old farmhouse on an unnamed British island, a place of ceaseless rains and battering winds. It's just her, her untamed companion, Dog, and a flock of sheep. Which is how she wanted it to be. But something is coming for the sheep - every few nights it picks one off, leaves it in rags. It could be anything. There are foxes in the woods, a strange boy and a strange man, rumours of an obscure, formidable beast. And there is Jake's unknown past, perhaps breaking into the present, a story hidden thousands of miles away and years ago, in a landscape of different colour and sound, a story held in the scars that stripe her back.

All the birds singing is an amazing serendipitous find for me. I was scrolling through my Twitter feed and noticed someone RT Evie Wyld asking if anyone would like to review her book and including a link to the first chapter. I followed the link, read the chapter and knew I wanted to read more! Up to this point I had no idea who Evie Wyld was - then I started discovering she's won all sorts of awards and been included in the Granta Best of Young British Novelists List. So, obviously I'm late coming to the party. At least I'm here now.

All The Birds Singing is the story of Jake, an Australian woman, now keeping sheep on a wet and windswept British island. It soon becomes apparent that she's running or hiding from something in her past; that she's put as much distance between herself and those events as she possibly can. The enormity of them is gradually revealed through flashbacks, each of which take the reader back further in time to the moment that shaped her life.

Now, someone or something is attacking her sheep. Is it merely an animal or could it be someone stalking Jake herself? The answers aren't clear cut - a lot is left for the reader to decide for themselves; how much is real? how much imagined? In this respect, it's not an easy read; the reader must think things out for themselves instead of being presented with all the answers. I definitely felt that having reached the final revelation, a re-read would bring more things to light. I like this quality in a book; the feeling that not all of its secrets have been yielded up in the first read, that I can go back and discover more. It's easy to achieve by sheer volume - no one can remember and track every plot thread of War and Peace first time through; harder in a novel under 250 pages.

On the outside, Jake is a bit of a misfit - she hasn't made any effort to blend in with her neighbours, resents having to call on them for help and generally keeps herself very much to herself. Her inner world is tormented, always expecting her past to catch up with her, and never letting her guard down, making it difficult for her to trust people or interact with them on anything more than a superficial level. Letting someone inside this fence is Jake's first step on the way to redemption and self-forgiveness...

Buy All the Birds, Singing

from Amazon
Posted by maryom at 11:43