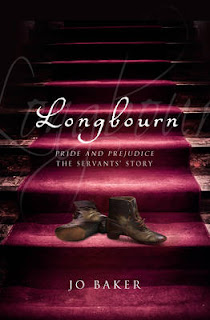 We all know Longbourn and its inhabitants as immortalised in Jane Austen's Pride and Prejudice - Mr and Mrs Bennet and their 5 daughters of varying degrees of beauty, wit and flirtatiousness that Mrs Bennet is SO desperate to marry off. But did you ever give a thought to the servants who keep the house running? - the housekeeper, butler, maids and footman who only appear to deliver messages or serve meals? This is the hidden world that Jo Baker brings vividly to life.
Sarah, the older housemaid, is rushed off her feet. With only Polly, an orphan from the poorhouse, to help, her world is an unceasing round of washing and cleaning, never quite finishing the day's tasks, always desperate for a minute's rest and something, anything, to break the monotony of it. That 'something' arrives; firstly in the shape of the new coachman, James: a surly taciturn man hiding who knows what in his past - and secondly in the form of Ptolemy, the exotic black-skinned footman employed by the Bingleys at Netherfield Park. Sarah finds herself as torn between her two admirers as any young lady from the drawing room could wish to be. Will she choose steady respectability or impractical romance?

Although I'd been intrigued when I first heard about Longbourn, as a long time Austen fan I'd had a few doubts about how much I'd like it. There have been so many spin-offs from Pride and Prejudice, good, bad and totally bizarre, and many have just left me cold. Longbourn, though, is a delight from start to finish. From the opening chapter, in the early morning with Sarah snatching a few quiet minutes before facing the hassle and unpleasantness of the weekly wash, the story-telling just drew me in and I didn't want to leave. The author's writing style made me feel I was there, feeling every chilblain and sore, every hastily snatched light-hearted moment.
Jo Baker has created and brought to life a whole cast of 'downstairs' characters - from housekeeper Mrs Hill who rules in a stern but maternal way and hides so much behind her respectable appearance to poor Polly who finds the endless drudgery actually an improvement on her life at the work-house - and also sheds a different, sometimes unpleasant, light on the well-known folk 'upstairs'.

It doesn't matter if you've read Pride and Prejudice - though surely with so many film and TV adaptations around most readers will be at least aware of the plot - this story concentrates firmly on the servants - not in a 're-telling of P+P from a different perspective' way but in a story of their own.