All The Souls by Mary-Ann Constantine 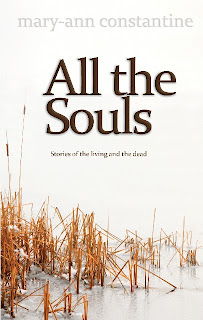 
'Stories of the living and the dead', it says on the cover -  and that sums up this otherworldly collection of nine short stories and a novella very neatly. Don't expect Hammer House of Horror ghostly goings on or vampires and zombies though - they're something far more subtle. They rather reminded me of the classic Curious, If True stories from Mrs Gaskell or, for a more modern take, Alois Hotschnig's collection, Maybe This Time, from Peirene Press.

Set mainly in remote reaches of Wales or Brittany, where old folk traditions linger on, by pools and ponds, the traditional gateways to the underworld, this is an unsettling, intriguing collection of stories. Ghosts speak to their still-living friends, a lonely man makes friends with a monk from the sixth century, from an undefined date in the future an old woman reminisces about the good old days when everyone drove cars...
I suspect these stories won't be everyone's cup of tea - they aren't simple, straightforward reads - but I rather liked them, though a couple were a little too enigmatic and vague for my liking.

Buy All the Souls

from Amazon
Posted by maryom at 09:11